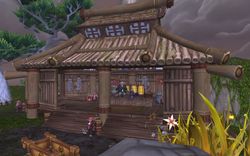 The Black Market was Madam Goya's original domain on the Veiled Stair not far from the Tavern in the Mists. The black market is not marked on the map, but can be found by heading straight east from the flight path outside the tavern. She ran the Black Market Auction House from here, an NPC-driven marketplace where players can bid on rare items NPCs put up for sale.

In Patch 6.0.2, only a Retired Exchange Guard remains, having quit his job, who says:

"Madam Goya has decided to move her operations to more lucrative markets. It seemed like a prudent time to give up a thankless job."