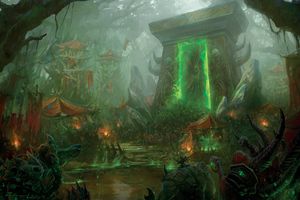 The Dark Portal in the Black Morass. 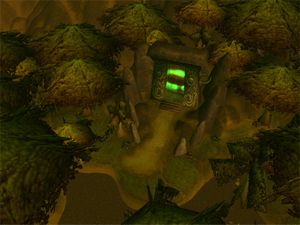 The Black Morass in World of Warcraft.

The Black Morass was the area that is now commonly known as the Blasted Lands and the Swamp of Sorrows. It is this region where the orcs first appeared in Azeroth through the Dark Portal.

The Morass Road crossed the swamp.

Once Medivh had opened the Dark Portal, the Orcish Horde on Draenor begin to cross their side of the portal into Azeroth reaching the swampland known as the Black Morass. It was here where the orcs made their first stronghold in the new world while they sent scouts to explore the area. After rumors of new creatures in the Black Morass King Llane of Stormwind dispatched Sir Anduin Lothar to uncover who they were. Lothar led a small force of knights to scout the Black Morass, resulting in the Knights of Stormwind clashing with orcs for the first time in a series of bloody skirmishes. Lothar and his men scored a number of small victories, yet for every orcs killed two more seemed to take its place. The humans were more outnumbered in each subsequent battle, and Lothar was eventually forced to pull back without venturing deep enough into the heavily guarded Black Morass to find the Dark Portal. Around this time, the Morass Road traversed the swamp making it easier for travel.[1] 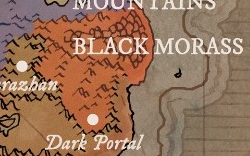 The Black Morass controlled by the Horde during the First War.

The orcs built the settlements of Rockard, Stonard and the first Temple of the Damned deep within the region.[2] Blackhand, Warchief of the Horde assigned Orgrim Doomhammer to oversee the construction of an outpost in the Swamp of Sorrows. As time passed, the Dark Portal began to wither the land around it.

During the Second War this area was the domain of the Black Tooth Grin clan, who were entrusted with the keeping of the Dark Portal.[3]

The defeat at Blackrock Mountain irreparably shattered Doomhammer's Horde. A large group of those who fled the battle made their way south, led by the death knight Teron Gorefiend. Their intention to reach the Dark Portal and, by extension, the relative safety of Draenor, was ruthlessly harassed by Turalyon and his armies. They tracked Gorefiend's force as it reached the Black Morass; the Alliance was eager to discover the exact location of the mystical portal from which the orcs had first invaded their world, which had eluded the human leadership thus far.

Turalyon and his forces descended upon their enemies just outside the Dark Portal itself. The ensuing battle proved to be one of the most brutal and desperate fought in the war, with the Horde and their death knights battling furiously for simple survival. In the end, they were able to hold off their Alliance foes long enough for the majority of their own forces to escape through the gateway. Unwilling to take the risk of pursuing, Turalyon ordered his soldiers not to follow the Horde through. Instead, he chose to have the demonic gateway sealed forever.[4]

To carry out this task, Turalyon called upon the Kirin Tor mage Khadgar and his fellow spellcasters. Together, they gathered around the Dark Portal and channeled an immense spell to rip the structure apart. The incantation succeeded in pulling apart the very threads keeping the rift open, forcing the path to another world to slam shut. The backlash of residual energy blasted apart the stone frame of the Dark Portal in a blinding arcane explosion. As the portal crumbled to dust, the gathered Alliance forces jubilantly cheered the development. The destruction of the gateway to Draenor marked the end of the Second War and, for the vast majority of those gathered, the end of a dark and personal chapter in their lives. The Alliance was victorious, yet the cost had been high.

By the time of the Alliance's destruction of the Portal the southern portion of the Black Morass was nothing more than parched red soil devoid of plant-life, mirroring Draenor's transformation of Tanaan Jungle into Hellfire Peninsula.[5] Yet the rift between the two worlds remained, and its damaging effects continued. This left behind a completely waterless, treeless wasteland which became known as the Blasted Lands while the northernmost part was named the Swamp of Sorrows, in honor of those who had died during the Second War.[6]

After the final battle against the Horde, Nethergarde Keep was built and elven scouts were placed on continual patrol within the region searching for any sign of the renegade Bleeding Hollow clan.[7] The orc clan, because they had failed to arrive in time to take part in the battle at Blackrock Mountain, they were now disappeared into the wilds near the Blasted Lands to plot their next move rather than risk destruction by attacking the humans.

The Black Morass can be visited in a The Burning Crusade instance, accessible through the Caverns of Time in the event called Opening the Dark Portal.