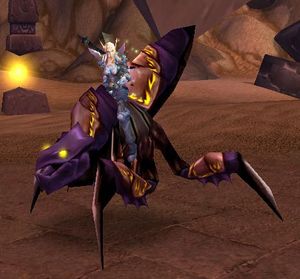 [60] Bang a Gong! which required the player to use the Scepter of the Shifting Sands on the gong on the Scarab Dais during the 10 hour battle with the Silithid, which occurred during the opening of Ahn'Qiraj. This was a one time server event.

Although many varieties of Qiraji Battle Tank can still be found in the ruins of Ahn'Qiraj today, the darkest of the species were only seen on the day the Scarab gong was rung.

On February 6, 2009, sometime after Patch 3.0.8a, Bornakk posted on the forums that the Ahn'Qiraj gates will automatically be open on all new future realms. He would also later clarify in the thread that there are no plans to have an alternative method to obtain the Black Qiraji Battle Tank.[1]

The final step of closure came with the release of Patch 3.2. The commendation officers in all major cities where removed and replaced with mailboxes.

With the release of World of Warcraft: Cataclysm, a new silithid mount has been added in the Archaeology profession, the 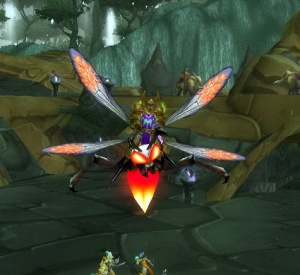 The scarab 'wasp' mount on PTR

If a player was logged out while mounted on this mount when patch 2.2 was deployed, upon logging in after the patch, the mount "buff" was replaced by a buff that transformed the player into a flying wasp. This was a one time occurrence, however, as there is no evidence the flying wasp buff is obtainable by any other means. However, a buff like it is available from

During the Patch 3.0.2 PTR, the Black Qiraji Resonating Crystal had a changed tooltip which was roughly "This mount changes depending on your Riding skill and location." Upon testing this in several locations, it was found that the mount became a wasp in any zone you could fly in and the regular scarab in other zones. This functionality was removed before the patch was released.