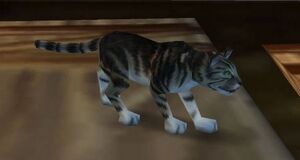 This item has a chance to drop from any mob in Hillsbrad Foothills.

Old Alterac saying: "A cat has nine lives, but needs only one."

This companion used to only drop from the various mobs around Dalaran Crater and Ambermill that were only able to be killed by Horde players. With the release of Cataclysm, the black tabby was moved to be a zone drop in Hillsbrad Foothills, as the mobs it dropped from originally have been removed. Thus it is now farmable by Alliance players.

Black Tabbies were once called "Maine Coons", but the name was changed in accordance with the profanity filter.[citation needed]  Also, the model used does not accurately depict the common Maine Coon cat. Plus, the real world breed's name is derived from the state of Maine, which does not exist in World of Warcraft.