The Black Tooth Grin clan was an orcish clan originally formed by Blackhand to serve as the scouting arm of the Blackrock clan.[1] It later came to be led by his sons, Rend and Maim. The clan is named after its custom of each member knocking out one of their own teeth to symbolize their loyalty to the clan.[2] 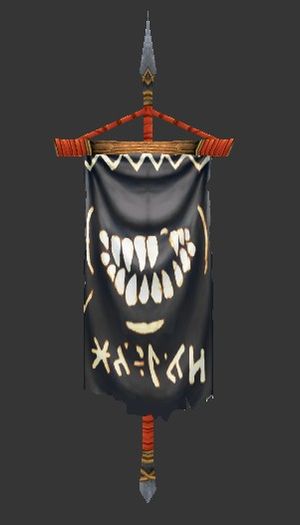 The Black Tooth Grin clan was founded by Blackhand shortly after he was named Warchief of the Horde, 5 years before the First War, and consisted of soldiers handpicked by the warchief himself.[1] Right after the opening of the Dark Portal, scouts from the Black Tooth Grin and Bleeding Hollow clans were sent by Blackhand to survey the Black Morass on the other side of the portal.[3] After Blackhand was deposed and killed by Orgrim Doomhammer, his sons Dal'rend and Maim continued leading the Black Tooth Grin. During the Second War, their clan was charged with the protection and preservation of the Dark Portal.[2]

After Gul'dan abandoned the Horde by sailing to the Tomb of Sargeras with the Stormreaver and Twilight's Hammer clans, Orgrim sent the Black Tooth Grin to hunt down the traitors. Gul'dan's followers took control over a portion of the Horde fleet in the Hillsbrad Foothills and sailed west, but the Black Tooth Grin were close behind and boarded the rest of the orcish vessels to follow in his wake. Not long after Gul'dan raised the Tomb of Sargeras from the depths of the Great Sea, the Black Tooth Grin approached the island. Gul'dan ordered Cho'gall and the Twilight's Hammer to hold off the pursuers while he and the Stormreavers entered the tomb. Inside the tomb, Gul'dan was torn apart by demons, but his skull was retrieved by the few Stormreavers who survived. Outside, Dal'rend and Maim's forces cut down many of the Twilight's Hammer and grievously wounded Cho'gall, forcing the ogre and his few surviving followers to flee west into uncharted waters. With vengeance served, the Black Tooth Grin orcs boarded their ships and sailed back east. As proof of their victory, they retrieved Gul'dan's skull from one of his followers.[4]

Meanwhile, the Horde forces in the Eastern Kingdoms continued being pushed south into Khaz Modan by the Alliance. When dragon riders dispatched by Nekros Skullcrusher found the Black Tooth Grin's vessels and delivered word of the Horde's retreat to Blackrock Spire, Rend and Maim ordered the Black Tooth Grin to alter course and sail to Stormwind. That region was still under Horde control, and from there they could reach Blackrock Spire by land. However, near the island of Crestfall, the Horde fleet was attacked by Admiral Proudmoore's Alliance navy. Though the Horde had dragons, the Alliance fleet was accompanied by Wildhammer gryphon riders. Rend and Maim's ship and a few other vessels survived intact, but most of the Horde fleet was sunk by Proudmoore's superior forces and the dragon riders scattered in all directions.[5]

When the surviving members of the Black Tooth Grin finally arrived at Blackrock Spire, the Horde had already been defeated. The clan gathered with other Horde survivors, mainly from the Blackrock clan, and waited until the Alliance pulled its forces out of the region. When the way was clear, the orcs snuck back into Blackrock Spire and took control of the stronghold. Dal'rend and Maim despised Orgrim for having killed their father and blamed him for the Horde's defeat. The brothers now planned to reforge the Horde as they saw fit and gradually reached out to other large groups of survivors. Kilrogg Deadeye and the Bleeding Hollow ignored them, but the Dragonmaw clan pledged their support and offered to give some of their enslaved dragons to the forces at Blackrock if they were ever needed.[6] In the aftermath of the Second War, many members of the Black Tooth Grin were captured by the Alliance put into internment camps.[7]

The identity of the Black Tooth Grin appears to have since become synonymous with that of the Blackrock clan and the Dark Horde.

Chieftain: Rend and Maim, the sons of Blackhand

Background: The Black Tooth Grin clan was originally part of the Blackrock clan, but splintered off before the Horde's passing into Azeroth. After their father was deposed from his position as War Chief by Orgrim Doomhammer, Rend and Maim decided to gain control over their own faction within the Horde without directly opposing the Doomhammer's ascension to power. The Black Tooth Grin, noted for its custom of each member knocking out one of his own teeth to symbolize his loyalty to the clan, is charged with the protection and preservation of the dreaded Portal. The unity of The Black Tooth Grin may be sorely tested should the opportunity arise for Rend and Maim to reclaim their father's station and avenge his death.[2]

As their mission was to defend the Dark Portal, most of the Black Tooth Grin were slaughtered by the forces of the Alliance of Lordaeron.[8]

Rend and Maim survived the battle over the Dark Portal. They took control of the survivors of the Blackrock and the Black Tooth Grin clans, and used them to form the Dark Horde, establishing their base at Blackrock Spire.[9] However, the Dark Iron dwarves made war against the Dark Horde for control of Blackrock Spire. Maim was killed in battle, and Rend made an alliance with Nefarian so that he could drive back the dwarves.[10] Rend now leads the various clans of the Dark Horde as their warchief.[11]