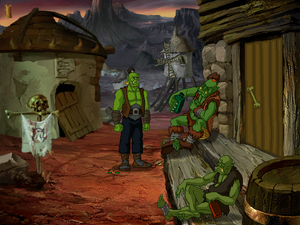 Black ale was a gnomish brew from the canceled game Warcraft Adventures. Rend and Maim paid the gnomes "a fortune" so that they designed the brew specifically to keep the orcs in the internment camps pacified. Black ale was given out every day by Alliance soldiers along with a share of meat, and the orcs that drank it lost their will to fight. Some Shattered Hand drunkards also sold their blade hands to Zul'jin in exchange for even more ale.

Grommash Hellscream forbade his Warsong clan from drinking the ale, but the latest batch of it was so potent that when forced to ingest some by Rend and Maim even the chieftain temporarily lost his will to fight.