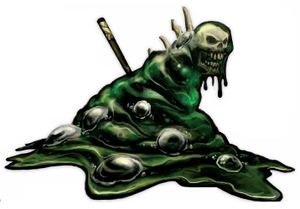 Black oozes (a.k.a. slag beasts) form in the foul slag pits of mining operations, given animation by mystic forces and freed to roam and consume. A black ooze is a mass of black, viscous liquid that flows along the ground in utter silence. Its surface bears an oily sheen. Swirls of glistening copper and silver rise to the surface and then sink back into the black depths. Black oozes possess a corrosive touch that dissolves metal; while their anatomy remains a mystery, they clearly seek to consume flesh as well. Some theorize that angry natural forces inhabited the original black oozes, animating the contaminated waste of mining operations and using it to enact vengeance on the miners. Others postulate that some miners, working far too deep in the ground, inadvertently operated in areas of powerful buried magic. Mystic energy penetrated the miner's slag pits and animated the sludgy runoff there. Whatever their origins, black oozes now exist as monsters in their own right, requiring no outside influence to live and reproduce (which they do by means of asexual splitting). Black oozes prefer to remain underground, though few venture out onto surrounding mountainsides. They do not appear to have any sort of sentience, society, or ambition beyond engulfing whatever they encounter. Black oozes, being non-intelligent, possess little in the way of tactics. They flow toward the nearest target, wrap around it until it completely dissolves, and then move on to the next target. Black oozes do not appear concerned with self-preservation, and some theorize they cannot feel pain. Thus they rarely retreat, even when obviously outmatched.

Black oozes are found in any mountains and underground, usually around Venture Company mines. A black ooze secretes a digestive acid that dissolves organic material and metal quickly, but does not affect stone. Any melee hit or constrict attack deals acid damage; worse, the opponent’s armor and clothing may dissolve and become useless. A metal or wooden weapon that strikes a black ooze may also dissolves immediately. Slashing and piercing weapons deal no damage to a black ooze. Instead, when struck by such attacks, the creature splits into two identical black oozes half the size of the originals.[1]

Black oozes are apparently sometimes referred to as slag beasts, although it may be a type of black ooze.