"My legacy is shaped by my power and nothing else."

Blackhand is the warlord of the Blackrock clan and the ruler of Gorgrond. He was second in the structure of the Iron Horde.[3]

Blackhand serves as the secondary antagonist in Warlords of Draenor.

A warlord with massive musculature and a dominating presence, the chieftain of the Blackrock clan formed brilliant strategies and maintained rigorous order within his armies. He could always turn the tide of battle. He could always find the enemy's weakness. When ogres attacked and his clan faced annihilation, he orchestrated a daring last-minute triumph alongside his second-in-command, Orgrim. On the eve of battle, the chieftain reclaimed a famous weapon, the Doomhammer, and restored hope for victory. The elements, chaotic forces of nature that had allowed him to survive the ordeal, encased his fist in dark, heavy stone. He took a name worthy of it: Blackhand.[4][5]

Blackhand was the first chieftain to join the Iron Horde. After a mysterious prophet gave him detailed schematics, Blackhand marshaled the Blackrock clan to industrialize warfare on a colossal scale. A genius tactician not to be underestimated, Blackhand leads ironclad battalions of orcs, ogres, and gronn with terrifying resolve.[4] He himself donned battle armor infused with the powers of flame.

A power-mad and tactically brilliant weaponmaster, Blackhand has both the ambition to rule and the cruelty to maintain his hold on the conquered. Under his leadership, the bold orcs of the Blackrock clan arm an entire world with the strength of steel. Blackrock slaves labor whip-crack to whip-crack on frightful siege engines—weapons that will inevitably be turned against the slaves’ families, neighbors, and homes.[6]

During the Assault on the Dark Portal, he ordered his clan, the Blackrock, to stop the invading forces. Their attempts failed, and the Blackrock Quarry was flooded as a result.[7] Later, he was seen on the same cliff with Grommash Hellscream and the other warlords as Grommash ordered the combined might of the Iron Horde army to head after the Alliance and Horde attackers.

He led the siege of Shattrath with Orgrim Doomhammer as his second. Not hesitating to murder innocents and villagers, he incurred the ire of Doomhammer. When confronted with his brutal acts, Blackhand swiftly killed him. This act angered Durotan who with the help of Yrel and Maraad fought on the Blackrock's flagship. During the fight, Blackhand defeated Durotan and killed Maraad who decided to save Yrel at the expense of his own life. He taunted Durotan and seared him with his hammer, but Yrel distracted the warlord and healed Durotan. With the Frostwolf chieftain's axe, Yrel wounded the Lord of Blackrock clan. Enraged, Blackhand vowed they would all die, but Khadgar teleported his allies and destroyed the boat with an Iron star before he could act upon this threat. However, Blackhand escaped by jumping into the sea.[8]

He is later seen at Warlord's meeting in Mok'gol Watchpost where he talks about the situation with the Horde, Alliance and the Foundry. 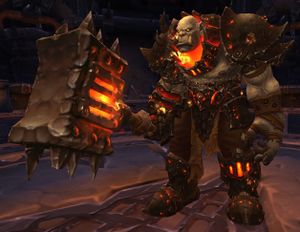 Blackhand leads his clan from the Blackrock Foundry. While his foundry was under attack for quite some time, earning some spite from Grommash, it was the final attack that sealed his fate. Champions of Azeroth stormed the foundry, killing a large amount of important Iron Horde members and eventually Blackhand himself. His severed arm was brought to Khadgar who confirmed the legends about him and the elements.

They said this was not the day of prophecy. Perhaps the burden will fall to one of your descendants, Orgrim. Or perhaps not. But the Doomhammer is still your legacy. I have my own. - Returning the Doomhammer to Orgrim.