The Blackhowl are a group of Gilneans who were manipulated[1] by Creed, a black drakonid in disguise as an affluent Gilnean noble calling himself Lord Hiram Creed. The group was made up of both Gilnean humans and worgen occupying Gilneas City. Creed had infected them with his own draconic blood,[2] which enhanced their physical capabilities but also unwittingly kept them loyal to Creed. The blood also had a possibility of killing the Gilneans as it worked its way out of their system.

The Blackhowl apparently repelled numerous Forsaken assaults, as seen in the courtyard of the Stoneward Prison where Creed resided, which was littered with Forsaken corpses. Black Prince Wrathion sent his rogue champion, who sought to earn his favor, to assassinate Creed in his crusade to eliminate all corrupted black dragons on Azeroth.[2] With his death, it is unknown what the fate of the Blackhowl group is, though it is probable they kept guarding Gilneas City. 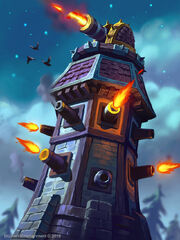 The Blackhowl are represented in the The Witchwood expansion for Hearthstone by a legendary warrior card, the Blackhowl Gunspire. The Blackhowl are a group committed to the defense of Gilneas. Their leader Creed was secretly a corrupted drakonid in disguise (who performed some icky blood rituals) and was "retired". The fate of the remaining Blackhowl were unknown... until now.[3]