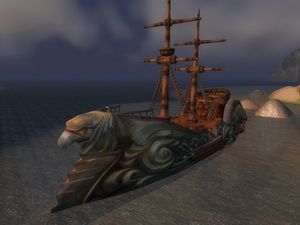 The Blackpool is an Alliance destroyer belonging to the Northwatch Expeditionary Unit. The vessel has mainly seen action off the western coast of Kalimdor, where it has taken part in the Alliance's efforts against the Horde in the region.

At the time of the Cataclysm, the Blackpool was under the command of Captain Fisher and found itself moored off the Northern Barrens outside Northwatch Hold. When the Horde launched a major attack on the hold, most of the naval garrison was either sunk or forced to retreat back to Theramore Isle for repairs. Left alone to defend Northwatch by sea, the Blackpool was almost successfully boarded by Horde troops, but was able to fight off the assailants with help from the hold.[1]