It was initially seen in "Blackrock and Roll" as a small village led by the Blademaster of the Blackrock Clan, where he sacrificed villagers from Strahnbrad to his demonic masters at a nearby pit.

Later, in "Blackrock & Roll, Too!," Arthas Menethil and Kel'Thuzad return to the village, this time finding it a massive series of orc towns in a snowy region. The orcs here were defending a Demon Gate.

It was presumably wiped from existence by the Scourge, as it is never mentioned again. 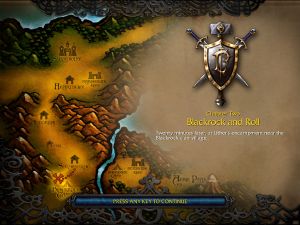 It was south of Strahnbrad, east of Alterac, and west of Durnholde Keep and the river that bisects the Hillsbrad Foothills. While no evidence of this expansive village exists in World of Warcraft, an estimate would put it somewhere around Corrahn's Dagger, Tarren Mill, the Uplands, the Horde entrance to Alterac Valley, or the mountains in that general vicinity.