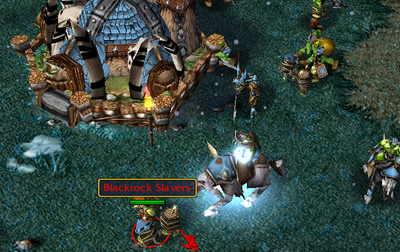 The Blackrock Slavers' base. The mouse is hovering over a Goblin Sapper. Just to his left is Far Seer Mazrigos.

The Blackrock Slavers were a part of the orcish Blackrock clan stationed on the Alterac Mountains during the Warcraft III: Reign of Chaos undead campaign, Path of the Damned, in the mission "Blackrock & Roll, Too!". They opposed the undead, led by Arthas and Kel'Thuzad, claiming to be the true servants of the Burning Legion. Their base was located on the eastern part of the map.[1]

The Blackrock Slavers, as every subgroup of the Blackrock, had a leader: Far Seer Mazrigos. They practiced slavery.

The archlich Kel'Thuzad sought a Demon Gate which the Blackrock Warlocks protected. Since the Blackrock Slavers guarded the south entrance of the Warlocks' base, while the Blackrock Raiders guarded the east entrance, the main player (who controlled Arthas, Kel'Thuzad and their undead minions) would have to defeat one of these bases. The most likely thing to happen, though, was that the player would defeat all of the orc bases, since the Slavers, just like all the other Blackrock bases, would constantly send attacks on the undead base, thus making it hard for him to focus on his main objective.

Mazrigos was the leader of the Blackrock Slavers.

Like the majority of the Blackrock subgroups, the Blackrock Slavers had a special unit available for training: the Goblin Sapper (see the screenshot). Their attacks would consist of those Sappers, as well as Grunts, Troll Headhunters, and occasionally Raiders. Since the Sappers' only attack was a suicidal blow on a target (causing high damage), they would have to be targeted by spells or air units in order to minimize the damage done.