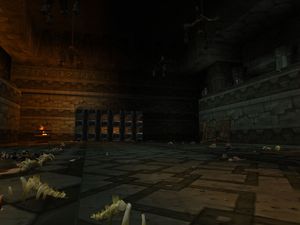 The Blackrock Stadium is the fighting arena of the false Warchief Rend Blackhand in Upper Blackrock Spire. He has aligned himself with Nefarian and hopes to take over the leadership of the Horde from Thrall. The stadium lies beyond the upper level of the Hall of Blackhand, and leads on to the Blackwing Lair instance portal and the Furnace.

It's also possible to enter the arena by dropping down from the western balcony. Player should drop down to the southern end in order to prevent the event from start prematurely. Once the event starts, orcs will appear on the balcony to cheer. Any players caught on the balcony when the orcs appear will be attacked. Anyone with a pet should dismiss the pet before dropping down. If they don't, the pet could run around and try to enter the arena from the southern gate and drag lots of enemies along the way.

If the players defeat all the waves, Nefarious will get furious and send Rend and his personal dragon Gyth to defeat the players. More information on strategies can be found on the Rend Blackhand page.

Once Rend is defeated, Lord Victor Nefarius will withdraw back to Blackwing Lair and the southern gate will reopen so the players can leave the arena.