For the mob located in the Burning Steppes, see Blackrock Warlock. 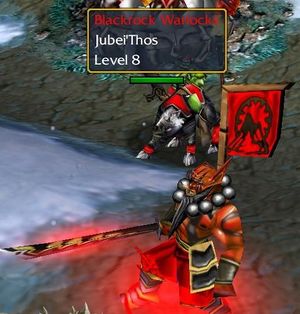 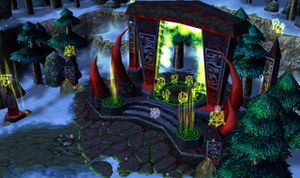 The Blackrock Warlocks were the Warlocks of the Blackrock clan forces in Lordaeron. Their leader was Jubei'Thos, a fel orc blademaster. They opposed the undead, led by Arthas and Kel'Thuzad, claiming to be the true servants of the Burning Legion. Their camp is just before the Demon Gate. They, along with the rest of the blackrock army there were destroyed by the Scourge, because they needed their Demon Gate to communicate with Archimonde.[1]

The archlich Kel'Thuzad sought a Demon Gate which the Blackrock Warlocks protected. Since the Blackrock Slavers guarded the south entrance of the Warlocks' base, while the Blackrock Raiders guarded the east entrance, the main player (who controlled Arthas, Kel'Thuzad and their undead minions) would have to defeat one of these bases. The most likely thing to happen, though, was that the player would defeat all of the orc bases, since the Warlocks, just like all the other Blackrock bases, would constantly send attacks on the undead base, thus making it hard for him to focus on his main objective.

Like the majority of the Blackrock subgroups, the Blackrock Warlocks had a special unit available for training: Red dragons. Their attack consist of those Red dragons until the destruction of the others orc camps. At this moment, they send grunts, troll headhunters, raiders, catapults and warlocks.