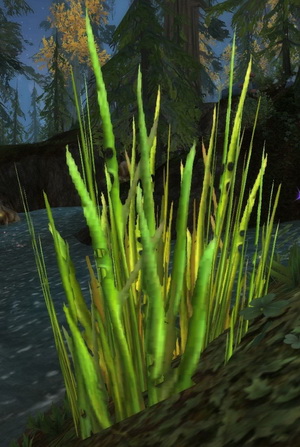 Blackroot is a type of plant which can be found in the Grizzly Hills.[30, 55]

[Blackroot Stalk] for the quest

Blackroot is also a type of wood and it was used in the First War by the Orcish Horde to construct the Temples for their Necrolytes.[1]

An altar made of Ironwood and Blackroot was used by Gul'dan during one of his dark incantations to kill many of his necrolyte followers and instill their evil spirits into the corpses of fallen Knights of Stormwind to form the first of the unholy Death knights which later fought in the Second War.[2]

It is unknown if this Blackroot wood and the Blackroot plant are linked, but it seems highly unlikely considering Blackroot Stalks are only known for their laxative property.