For the Profession, see Blacksmithing. 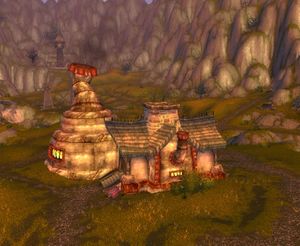 The Blacksmith in Arathi Basin.

Blacksmiths or smithies are structures that are used by several races where the smelting of metals as well as the crafting of various weapons and armors take place. They contain forges.

As the metalworker of the town, he was responsible for the grade and quality of the steel used in weapons and armor. If funds were devoted to the refining of his craft, he could upgrade the materials and skills used, allowing the creation of better swords and shields. His talents were also sought after in the construction of specific goods and building materials that were essential to other professions.[1]

All objects that required the strength of iron were made here. As money was spent to build hotter forges and mine for better metals, the quality and deadliness of the axes and shields that were produced would increase. Metal was also a vital component in the construction of some orc's buildings and materials, and to create a site for them would be impossible without the aid of the Blacksmith.[2]

Blacksmiths were an important part of many settlements dependent on military protection. While the metals that they forged were a vital component in the construction of advanced buildings, they were especially known for their skill at weapon-crafting and armoring. The smiths of Lordaeron, occasionally aided by their skillful dwarven allies, were renowned for producing some of the finest quality weapons in the northlands. The Blacksmiths and elves were rumored to be developing a machine that could alter the course of the war against the Horde.[3]

The orcs that lived and worked in the blacksmith shops were veteran warriors themselves. Understanding the value of strong steel, they were always developing new techniques and methods to improve their weapons or upgrade the quality of their armor. The steel that they forged was essential in the manufacture of the devastating catapult, and their skills also aided in the crafting of the strange mechanical workings that were used to improve the accuracy and strength of these great machines. Their expertise was often required for the construction of advanced structures.[4]

At the blacksmith, the dwarves refine their mastery of gunpowder. It is also at this building where more effective steel-forging methods are researched and perfected. Human troops depend upon the blacksmith to provide both increasingly effective weapon blades and more impenetrable plates of armor.[5]

The Blacksmith helped the high elves to fend off Arthas and the Scourge as he tried to attack their capital city of Silvermoon and Quel'Thalas in Warcraft III: Reign of Chaos by serving as an upgrade point. However, the Blacksmith couldn't be built by the High elf worker unit likely due to the limited ability of the map editor prior to the Warcraft III: The Frozen Throne expansion. With the addition of The Frozen Throne expansion's map editor, it is possible to make additional groups with building orders.

The blacksmith also helped the blood elves and Kael'thas during the Curse of the Blood Elves campaign in The Frozen Throne.

An invention of the crafty trolls, this structure maximizes potential by serving as a mill for lumber as well as a forge for weapons smithing. Here weapons and armor are tirelessly reworked for maximum efficiency. Trolls here can also create one of their most useful fortifications: spiked barricades.[6]

Human blacksmiths can be found all throughout Azeroth, Outland and Draenor, and even in battlegrounds such as Arathi Basin. While a few blacksmiths have been abandoned or destroyed, some still remain intact. Their design seems to be a cross between the ones used in the Second and Third Wars.

Many forges and shops in World of Warcraft can otherwise be considered as blacksmith shops too, for almost any community will have at least an anvil and a small forge to go with it, along with an NPC that will repair armor for a cost. We will list here only smithies similar to what they were in the former strategy games, and for the rest see the list of Forges and anvils.

Blacksmiths in the Broken Isles