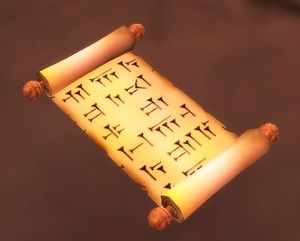 Plans are the item name prefix given to items that teach Recipes for the blacksmithing profession.

Blacksmithing Plans are also static items found within Blackrock Depths and Stratholme, that teach particular blacksmithing recipes. If a blacksmith with 300 skill opens them, they can loot that recipe to learn it. Once all possible plans in the instance have been learned, they will no longer become interactable.

The Plans were once interactable by anyone, but if someone else opened them, they gained nothing and the plans disappeared.

Using the plans found in Blackrock Depths does not spawn a mob.

[Plans: Corruption] is found near the second Ziggurat, and can be looted by a blacksmith with 290 skill and on the quest

The Black Guard Swordsmith was needed to complete the quest

[61D] Corruption in the process of gaining the swordsmithing sub-specialization.

[Plans: Serenity] are found in the Scarlet Bastion. Taking them spawns the Risen Hammersmith mob.

The Crimson Hammersmith had to be defeated to complete the quest

[61D] Sweet Serenity in the process of gaining the hammersmithing sub-specialization.