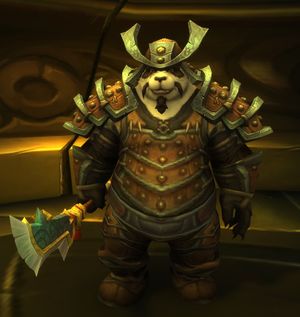 The Blacktalon Quartermaster in the Chamber of Heart.

The Blacktalon Quartermaster is a pandaren who sells replacement items that were previously awarded by Wrathion in his legendary quests on Pandaria.

Note that to be eligible to purchase items from the quartermaster (or from Commander Oxheart, who sells them as well), players must have completed the relevant quests. So, the three Crystallized gems require completion of

[Eye of the Black Prince] requires completion of

[90] Call of the Packmaster or

[90] The Soul of the Horde, the Primal Diamond metagems require completion of

[90] The Crown of Heaven, the six cloaks of virtue require

[90] Cloak of Virtue, and the essence to make the legendary cloak require

If you purchase from the Quartermaster, the reputation discount will apply, whereas Commander Oxheart is affiliated with no one.

Once you have earned the respect of his majesty, the Black Prince, then you will have earned mine.

Until then, begone. I have nothing to sell to you.