For the server of the same name, see Server:Blackwing Lair US.

Blackwing Lair is a level 60, 40-man raid dungeon located at the top of Blackrock Mountain, home to Nefarian. It was implemented in patch 1.6.

In the dark recesses of the mountain's peak, Nefarian, the eldest son of Deathwing, conducts some of his most awful experimentation, controlling mighty beings like puppets and combining the eggs of different dragonflights with horrific results. Should he prove successful, even darker pursuits rest on the horizon.

And, yet, the Lord of Blackrock is not a mere scientist - he is a great dragon cornered in his lair. Can he truly be defeated by mortal hands?

Nefarian has vowed to crush Ragnaros. To this end, he has recently begun efforts to bolster his forces, much as his father Deathwing had attempted to do in ages past. However, where Deathwing failed, it now seems the scheming Nefarian may be succeeding. Nefarian's mad bid for dominance has attracted concern from the red dragonflight, which has always been the black flight's greatest foe. Though Nefarian's intentions are known, the methods he is using to achieve them remain a mystery. It is believed, however that Nefarian has been experimenting with the blood of all of the various dragonflights to produce unstoppable warriors.

[60D] Blackhand's Command is no longer necessary and has been removed from the game). 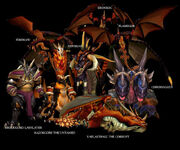 With Transmogrification many players want to run Blackwing Lair for the distinctive weapons, including

[Claw of the Black Drake],

As of Patch 5.1, three bosses drop battle pets: Razorgore the Untamed drops the

[Blackwing Banner], and Chromaggus drops the

[Elementium Ingot] is found as a rare drop from the

Blackwing Technician that inhabit the lair. This ore is used to smelt

[Thunderfury, Blessed Blade of the Windseeker]. Players can also learn