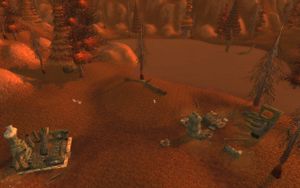 Blackwood was a town built on the shores of Blackwood Lake in what is now the Eastern Plaguelands. It was ruled by Baron Garithos.

The baron's son, Othmar Garithos, joined the Alliance army as a knight during the Second War, where he saw combat in Quel'Thalas defending the high elven homeland from invading orcs. While he was in Quel'Thalas, however, a small band of orcs broke off from the main invading force and burned Blackwood to the ground, killing all of its inhabitants in spite of the valorous defense marshaled by its lord. Othmar's family perished doing their duty, defending the homes and lives of their subjects. He blamed the elves for the loss of his town and family, believing that the elves diverted forces away from the Alliance's true goal: the defense of humanity alone. After his father's death, Othmar was awarded his title and continued his service in the armies of Lordaeron.[1]