The Blade's Edge Mountains, once known as Frostfire Ridge and Gorgrond, are a mountainous region of Outland north of Zangarmarsh and west of Netherstorm. It is full of barren plateaus, axe-cut valleys, and forested tablelands, all sharply contrasting and separated by crags dense with distinctive knife-sharp spikes. While inhabited by a number of races, particularly notable is the large population of ogres, dominated by the hulking gronn. The mountains were created by the fusion of Frostfire Ridge and Gorgrond.[1][2]

As described on Worldofwarcraft.com:

The harsh winds that rip through the canyons of Blade's Edge have, over time, worn the bordering escarpments into menacing, dagger-like spikes that lend the region to its name. This foreboding realm is also the homeland of the brutish ogres, who wage constant, fierce battles against one another to gain the favor of their merciless gronn masters. 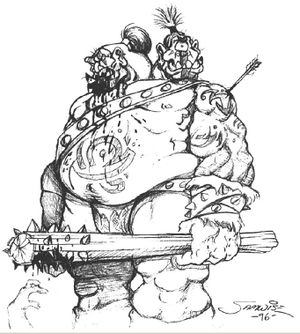 Blade's Edge Mountains were once the lands of Gorgrond and Frostfire Ridge, which merged together when Draenor shattered. Before Draenor's destruction, the iconic stone spikes were present in Frostfire Ridge, along with a peak named Blade's Edge Mountain. The two regions were also the homeland of the ogres. Apparently originating as a weaker sub-species of the gronn,[3] the ogres were one of Draenor's last giants. Still, the gronn show little love for their children, ruling over the ogre clans with an iron fist.[3] Before Draenor's shattering, Frostfire Ridge was also the home of the orcs in the Thunderlord clan. At some point both regions were also inhabited by a mysterious arakkoan civilization named Apexis. The Grishna, Lashh'an, Ruuan'ok and Vekh'nir arokkoa are still living there.

Rise of the Orcish Horde

Orcs and ogres share a history, though there is some discrepancy on what relation they had to each other. They were enemies for generations until the rise of the Old Horde, even prior to the orcs' vicious transformation into savages by the hand of the Burning Legion. Orcs ruthlessly conquered ogre territory, enslaving and killing ogres as they went; the war lasted quite a while, fueled by corruption from demonic forces. Soon the ogres were broken, the race either forced into exile or enslaved and used in experiments. The Horde enslaved and experimented with several of the ogre clans. The warlock Gul'dan decided that the orcs required the ogre's strength in the orcs' war against the draenei, and his experiments created the ogre mages. Several ogre clans passed through the Dark Portal to the Eastern Kingdoms before the First War simply to escape the orcs, although they didn't like the humans much either. To this day, most ogres hate orcs with a passion, remembering the wars they fought against each other.

At the same time, some ogres and orcs were clearly allies; ogres told the orcs that they were being whipped by the gronn and allied with Blackhand and his Horde to rebel back. This also provided the ogres with food and weapons. In fact, when the orcs in their demonic craze razed across Draenor in order to kill any other leaving creatures, sometimes fighting among themselves, the only race they might have called allies was the ogres. The ogres served as massive, single-minded warriors who served as little more than walking siege engines for the orcs as they plundered and conquered.[4] Prior to the demonic corruption of the orcs, even off-springs between ogres and orcs occurred. Having the intelligence and cunning of and orc combined with the strength of an ogre, they were honored by shamanistic orcs for being noble and savage creatures of the land. They were called Mok'Nathal, the most famous of them - Rexxar - later willingly joining the old Horde. Other Mok'Nathal can still be found in a small village in Blade's Edge Mountains.

After the Second War

The ogres were brought through the Dark Portal after the First War to act as enforcers to quell needless infighting between the orc clans. They also brought massive devastation to the human lands as soldiers. However, eventually these ogre clans broke free and went their own separate ways. Today, both the Eastern Kingdoms and Kalimdor are inhabited by large clans of ogres. Some of them have rejoined the "new" Horde.

Eventually, Deathwing came to know about the Dark Portal and the world on the other side. As there were no dragons in Draenor, he felt sure that few of its denizens would dare challenge his black dragons. After the orcs' defeat in the Siege of Blackrock Spire, he made a pact with Teron Gorefiend in which the black dragons would aid the Horde in return for safe passage of his flight and his eggs to Draenor. Deathwing, his lieutenant Sabellian and a group of black dragons allowed the orcs to ride upon them in order to retrieve four artifacts which Ner'zhul required for opening new portals to other worlds for the orcs to conquer. When Ner'zhul had them in his possession, he, the remaining Horde, Deathwing and an escort of his black dragons ventured to Draenor through the Dark Portal. Deathwing hid clutches of his eggs all over Draenor, but most of his black dragons settled in Gorgrond.[5] 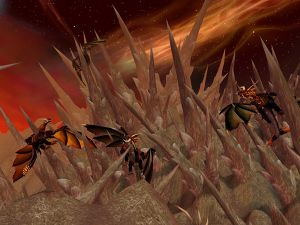 The dragons were however not welcome by Gruul, the leader of the gronn and ogres. They began to destroy both dragons and eggs alike, much to the dislike of Deathwing. Fighting back, he was also encountered by the Alliance Expedition, a military Alliance-force seeking to recover the Skull of Gul'dan which happened to be in Deathwing's property. Deathwing was defeated by Khadgar and escaped back to Azeroth, leaving only a small portion of black dragons to guard the eggs. Notice that this seems to be a retcon of Deathwing's Lair in WarCraft II.

Outnumbered and leaderless, the dragons were torn from the sky by the Bladespire clan's spells and impaled by Gruul on the jagged spires. For this, Gruul earned the title "the Dragonkiller". The remaining eggs were affected by the turbulent nether energies when Draenor was torn apart, hatching into the Netherwing dragonflight.

The expedition, whose primary purpose was to retrieve the Book of Medivh, another of the artifacts, later encountered Mogor and his Laughing Skull clan. The clan had stolen the book from Ner'zhul, betraying him at the same time. Mogor also commanded an order of death knights (possibly by using the book) which held knowledge which Ner'zhul required in order to open multiple portals across Draenor. He sent forces to kill Mogor and subjugate the Death Knights, but The Death Knights were destroyed instead and Mogor escaped. Mogor made a truce with the Alliance Expedition afterwards. In return for the dominance of his clan in the Blade's Edge Mountains and securing the passes across them, he would deliver the book. Khadgar, Alleria, Turalyon, and their strongest warriors reinforced Mogor and the Laughing Skull clan and stopped the Bonechewer clan, then attacked a stronghold of the Thunderlord clan (possibly Thunderlord Village) and destroyed it, gaining the control of the region. The book was eventually handed by Obris to Khadgar, who used with the skull to close the Dark Portal before Draenor's sundering tore apart Azeroth as well. During Draenor's destruction Frostfire Ridge crashed into Gorgrond and created the modern day Blade's Edge Mountains. 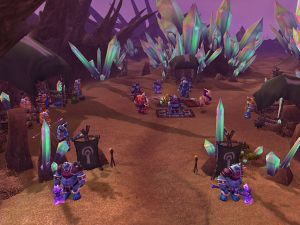 The ogres at Ogri'la are trying to make a new life for themselves.

The ogres in Blade's Edge Mountains are still controlled by the gronn, divided into the Bladespire clan and Bloodmaul clan who are fighting against eachother. The player is supporting the Bloodmaul, aiding Mog'dorg the Wizened through a series of quests which eventually leads the player to (the ability to gain reputation with) Ogri'la. This is a group of ogres who have become intelligent due to the influence of apexis crystals. Possibly, they may be a "revival" of the once intelligent ogres on Draenor.

Deathwing's lieutenant Sabellian is still present in the disguise of "Baron Sablemane", a human. He, like Rexxar who has returned to Blade's Edge Mountains to protect the remaining Mok'Nathal from the gronn and ogres, and Mog'dorg the Wizened, gives quests to kill Gruul's sons. Ultimately, this ends the gronn's control over the ogre clans of Blade's Edge Mountains. Gruul himself is a raid boss. Several humans, orcs, broken, and draenei have begun to worship the remaining black dragons, creating the Wyrmcult. It is led by Maxnar the Ashmaw, a drakonid. The player, helping the Cenarion Expedition which have settled in Evergrove, kills him in a quest due to the Wyrmcult's hostility. Other black dragons are trying to destroy Ogri'la.

The Burning Legion is still heavily present, also being one of the forces threatening Ogri'la. After arriving in Outland, Illidan Stormrage, Kael'thas Sunstrider and Lady Vashj managed to seize the Black Temple from Magtheridon by shutting down several dimensional gateways used by Magtheridon to bring demons from the Twisting Nether.[6] In World of Warcraft, it is revealed that one of these gateways was actually located in Blade's Edge Mountains. It seems the Burning Legion has managed to reactivate it - Baelmon the Hound-Master is now using it to summon Wrath Hound-reinforcements. The player helps the Cenarion Expedition by killing him too.

To the north at Bash'ir Landing, a group of ethereals are smuggling manacells for the blood elves ruled by Kael'thas. The manacells are produced in the blood elf-controlled dimensional ship named Mechanar, and are somehow delivered to the Magister's Terrace. Apparently, Kael'thas is planning to use the power in them to summon his new master Kil'jaeden in the Sunwell Plateau.

Mogor is no longer in Blade's Edge Mountains; he is instead leading a group of Warmaul ogres at the Laughing Skull Ruins in Nagrand. He is killed by the player as the final boss in the Ring of Blood. It is unknown if anything remains of the Laughing Skull clan.

The spiky cliffs in the zone neatly divide the mountains into distinct regions and elevations, centered around the long, deep, dusty Daggermaw Canyon, which stretches from the southernmost point of the zone to tall bluffs in the north. To the east is an equally long, rocky, flat-topped ridge, while curving along from the west to the north is an even higher, longer ridge split into two crystal-strewn plateaus by an impassable peak. Five smaller, forested mesas at modest elevation jut out from below these heights, connected through the ridges by twisting tunnels, and across the canyon by massive stone bridges that look more like immense fallen slabs of rock than anything built by humanoids. Extending up and down from these middle heights are steep switchbacks and ramps, but no land passage is possible up the steep cliffs of the Crystal Spine and Vortex Summit plateaus to the north and west - only flight makes them accessible.

To the south is a gargantuan ridge which would completely cut the zone off from Zangarmarsh if not for more tunnels passing through it. In the east, the goblin-built Gyro-Plank Bridge connects the zone to the floating islands of the Netherstorm. 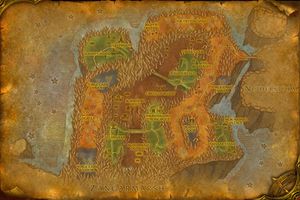 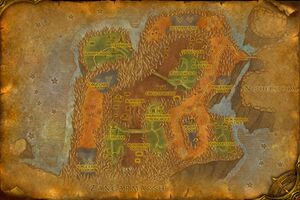 From Zangarmarsh to the south, take the path through the cave in the northwest portion of the zone. [69, 35] 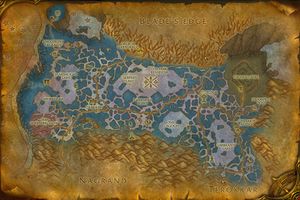 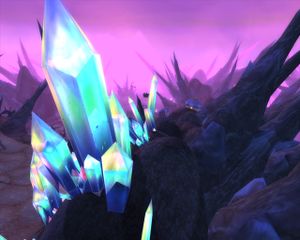 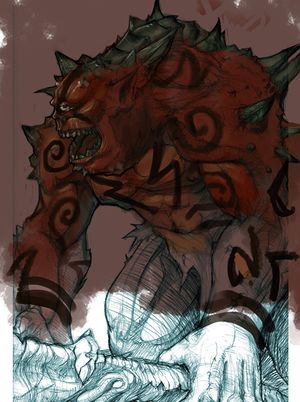 Gronns are the most massive creatures in Outland.