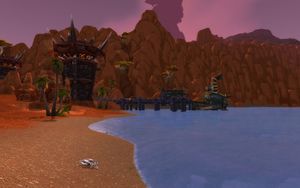 The shore and pier.

Bladefist Bay is a portion of the Great Sea off the eastern coast of central Kalimdor. It is likely named after Kargath Bladefist, former chieftain of the Shattered Hand Clan. It is on the northeastern coast of Durotar around Skull Rock, and the southern coast of Azshara can be seen to the north. The bay can be easily reached from Orgrimmar by taking the road east out of the front gate, past the Dranosh'ar Blockade.

Bladefist Bay has been called "the Great Sea's midden heap", since rubble from the sea frequently washes in on the tide.[1]

After the War against the Lich King, a small port was built to serve as a quick means for ships to travel to Orgrimmar. A goblin yacht, used to escape the Lost Isles, can be found docked here. This is also where the mercenary vessel travelling to Vashj'ir comes into port, during

[81] Call of Duty. A short distance out to sea, the airship Hellscream's Fist rests above the water, and will escort Horde members to the Jade Forest during the quest

[86] All Aboard!. Several Dranosh'ar Fishermen cast their lines off the pier.

To prepare for a potential naval invasion, Garrosh Hellscream and his forces Kor'kron and Dragonmaw fortified the bay. During the Siege of Orgrimmar, Alliance and Horde fleets led by Varian Wrynn and Lor'themar Theron seized the bay and fought their way to the gates of the city.

The fleet to attack the Broken Shore sailed from here.

Warchief Sylvanas's fleet sailed from here to the Broken Isles.

The Sunstrider also sailed from here to Azuremyst Isle to join the Argus Campaign.

The clam meat for the fishing daily quest

[120 Daily] Clammy Hands is found in the clams underwater in the bay.