“To take up the weapon of a Blademaster is to invite your own demise.”

Blademasters, also known as blade masters,[1] are legendary orc warriors of the Burning Blade clan, known for their mastery over swords, axes and polearms.

The blademasters are known to have existed long before the corruption of the orcs at the hand of the Burning Legion when the Burning Blade clan was still dwelling in Hallvalor in Nagrand and using elemental fire magic. Judging by the Ancient Blademaster, the way of the blademaster was already an ancient one years before the forming of the Old Horde.

Though their numbers are few, the seasoned blademasters represent an elite fighting force within the Horde. These skilled swordsmen were once part of the ill-fated Burning Blade clan which consumed itself in the throes of demonic corruption. With their clan scattered and broken, the proud blademasters swore a grim oath to free themselves and their brethren from demonic control once and for all. Under Thrall's command, the blademasters once again joined the Horde and came to serve as the young Warchief's personal honor guard. Though blademasters are masters of stealth and guile, they value personal honor above all else.[2]

The Blackrock Scouts and Blackrock Warriors, sub-groups of the Blackrock clan loyal to the Burning Legion, were also led by blademasters.

Fel blademasters were numerous in the forces of Magtheridon, and were the chieftains of each of his bloodthirsty sub-legions. Each of the four great fel orc fortifications on the Hellfire Peninsula, guarding the dark portals, was led by a blademaster. And in the Black Temple of Magtheridon himself, several blademasters led legions of fel orcs in defense. Illidan, Kael'thas, Lady Vashj and Akama had great battles against the fel orc blademasters both in and outside of the temple.[3][4]

On the alternate Draenor where the orc clans rallied into the Iron Horde as a result of Garrosh's actions, the Burning Blade, led by a blademaster known as Azuka Bladefury, willingly joined. Following Gul'dan's takeover of the Iron Horde, a blademaster called Jubei'thos became a member of his Hellfire High Council. 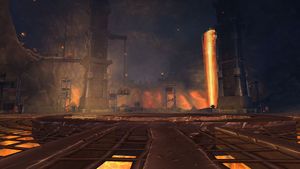 The Masters' Cavern, where warriors of the Burning Blade train to become blademasters.

The blade is not the only important item a blademaster carries. Once he had passed his final tests in the Masters' Caverns, the blademaster was given the honor of wearing the Burning Blade's banner.[6] The banners carried by blademasters are described as cumbersome, and it's hard to believe that they don't affect the blademasters' ability to fight.[7] In Warlords of Draenor, blademasters are shown to be capable of manipulating fire, with many of them using abilities such as "Blazing Coil".

Sticky, smelly, and highly flammable, blazegrease is liberally applied to the swords and axes of the Burning Blade clan before battle. Though some warriors choose to ignite their weapons before battle, most let the inevitable contact of blades and armor spark the blazegrease for unpredictable intimidation.[8] 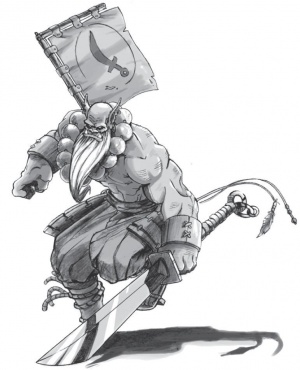 Moogul the Sly, a blademaster in the RPG.

Note: Many of these are random hero names in Warcraft III.

Among the Horde, orcs with the gladiator class are known as blademasters.[10][11]

Blademasters lead their people into melee combat, unhesitatingly seeking the most vulnerable enemy champions — magi, druids and the like. Blademasters willingly go toe-to-toe with other melee experts as well, drawing from ages of tradition to fuel their combat prowess. Their sashimono banners allow their troops to identify them on the battlefield and move to where the action is thickest. Many act as bodyguards for other Horde champions.[11] Banner of the Black Wolf is in the same style as those worn by orcish blademasters.[12]

Chieftain of the Warsong clan and an orc legend, Grom Hellscream is a blademaster of the old traditions.[13] Thrall is also a blademaster.[14]