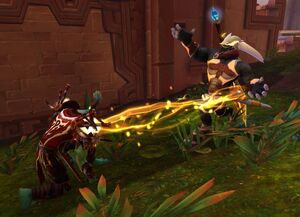 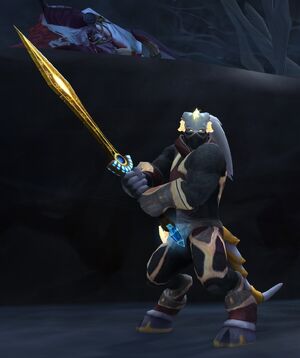 Blademaster Telaamon is a Lightforged draenei located on Krokuun. He was born on Argus and one of the draenei that fled on the Genedar, witnessing the Burning Legion turn the world into a bitter, dead husk.[2] He would later move to the Xenedar and became one of the Lightforged.

In the present, he is a blademaster of captain Fareeya's forces in the Army of the Light, who was in the process of securing an area in Mac'Aree for Prophet Velen along with Grand Vindicator Sorvos and Baraat the Longshot when the Burning Legion came crashing down on them. Their captain then sent orders to regroup with the Prophet, through adventurers to the three soldiers.

Telaamon would later join the Alliance along with the rest of the Army of the Light. During the Fourth War, he willingly joined a suicide mission in Nazmir to bait the Horde away from Dazar'alor while the Alliance invaded. As Telaamon explained to Halford Wyrmbane, he had seen what had happened to Argus due to some of his peoples' uncontrolled desire for power, and if the Horde was left unchecked he knew the same would happen to Azeroth. At the Blood Gate in Zuldazar, Telaamon captured Rokhan who was soon rescued by Horde adventurers.[3] In Nazmir, he sent mirror images to fight Witch Doctor Kejabu and Jo'chunga. The adventurers aided the Zandalari trolls and defeated the images, weakening Telaamon.[4]

Ultimately, Telaamon was willing to pay any price to ensure no one went through the same pain he did,[5] and though he was killed by the Horde, the diversion for which he and his team gave their lives was successful.[1] After the Battle of Dazar'alor, his torn body was found by Alliance scouts.[6]