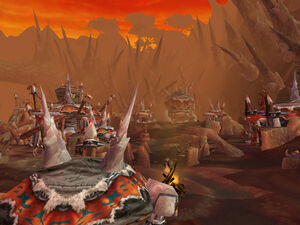 Since time forgotten the Mok'Nathal have fought with the Bladespire ogres.[4]

Before Draenor was shattered into Outland, the Bladespire ogres ruled most of Frostfire Ridge with their ancient enemies, the Frostwolf clan. They ruled from Bladespire Citadel, and had numerous villages and settlements.

The Bladespire were once part of the Gorian Empire, and during that time forcefully bred ogres with orcs to create mok'nathal servants. The mok'nathal rebelled, and working with the Frostwolf and Whiteclaw clans, destroyed Bladespire power in Frostfire Ridge during the Battle of Bladespire.[5] Since the empire's collapse, they are now ruled by the gronn.

After the Invasion of Draenor, the Thunderlord clan abandoned their stronghold to join the other fel orcs.[6] After that the Bladespire ogres inhabited the Thunderlord Stronghold until the reopening of the Dark Portal by Doom Lord Kazzak when Horde pushed them out.[7] They are the strongest clan of ogres in the Blade's Edge Mountains, having the favor of the gronn known as Gruul the Dragonkiller, and his seven sons.[2]

The Mok'nathal have managed to push the Bladespire back so that they now hold only a tenuous grip at Bladespire Outpost,[4] but have other fortifications far from Mok'Nathal Village, such as Bladespire Hold and the nearby areas. Gnosh Brognat is leading the outpost.[4] These Bladespire ogres carry totems, seeking to use them to manipulate and control. Spiritcaller Dohgar is recruiting adventurers to retrieve totems.

They are the closest group of ogres to Thunderlord Stronghold, so Rexxar and Tor'chunk Twoclaws, who are leading the attacks against the ogres,[8][9] are sending any adventurer they can to do battle against the Bladespire.[1] Commander Skyshadow is also sending adventurers as it is a grave threat.[10]

The Bladespire are the rival clan of the Bloodmaul clan.[10] These ogre clans fight against each other, vying for the dominance that comes with having the favor of Gruul the Dragonkiller.[11] The Bladespire clan is crushing the Bloodmaul, so they needed a new weapon. For that reason T'chali the Witch Doctor tried to make the perfect brew, one that strengthens the Bloodmaul and weakens the Bladespire.[12] Korgaah kicked T'chali in the head so he wants revenge,[13] for that reason he wants vengeance over the whole clan.[14]

Once you are friendly or above with Ogri'la, you can do many emotes while targeting the ogres for amusing results:

In addition, if you attack and kill the clan's ogres after becoming king/queen, they will say various phrases upon death.

There used to be a Bladespire camp located in western Blade's Edge Mountains. It was populated by Bladespire Elders, Bladespire Guardians, and the Bladespire Keg King. In patch 2.1, the camp and its NPCs were replaced by Ogri'la.