The Blast Furnace is the third encounter in Blackrock Foundry, and the final encounter of the Slagworks wing.

The Blackrock clan’s unique ability to smelt the black ore, a substance so dense that ordinary flame does not even soften it, has always been their most closely-guarded secret. Deep within the Foundry, their furnace contains a primal force as old as Draenor itself, raging within the confines of its prison as it emanates a preternatural heat. 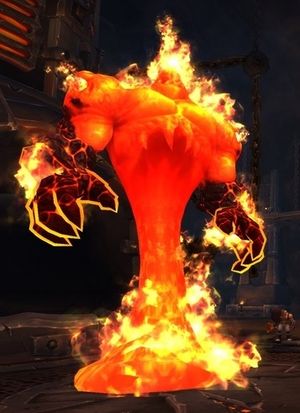 Heart of the Mountain.

The objective of this encounter is to destroy the Foundry's massive furnace. Players must first disable the Blast Furnace's Heat Regulators, which will release the Heart of the Mountain, a blazing fire Fury that powers the furnace. Primal Elementalists then join the fight and channel beams to control the raging Fury. Once the Primal Elementalists have fallen, the Heart of the Mountain is unleashed and must be dealt with directly.

Players must disable the Heat Regulators located on each side of the Blast Furnace to disable it.

With all of the Primal Elementalists defeated, the Heart of the Mountain attacks everything in site.

Aggro
Protect the furnace at all costs!

Wipe
Can't take the heat? Get out of the furnace!

Heart of the Mountain

Phase 3: Freedom!
Heart of the Mountain yells: Freeeedommmmm!
Blackhand yells: A small victory, but now you will perish in the flame that burns at the heart of Blackrock!

Wipe
I will burn this mountain unto ash!

Death
Heart of the Mountain yells: My fire is... Exting..uished.
Blackhand yells: What happened to my Furnace? Where are my guards? Shut these intruders down!