This article is about the physical corruption of the Plague of Undeath. For other plagues, see plague. For other blights, see blight. 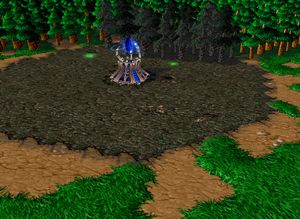 A spirit tower surrounded by blighted ground in Warcraft III. 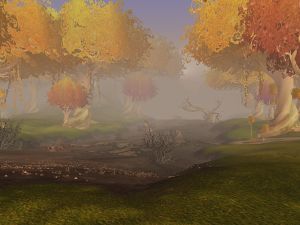 The blighted ground of the Dead Scar in the Eversong Woods.

Blight is the term for the physical corruption of the land by the presence of the Lich King's undead plague. The plague affects all it touches, sterilizing the land, warping its natural inhabitants into bloodthirsty mutants, and twisting the local flora into disgusting mockeries of proper plants. The Eastern Plaguelands (most specifically Plaguewood) and the Dead Scar that runs through Quel'Thalas are perhaps the most startling examples of the long term effects of the blight.

In Warcraft III, the blight is a core mechanic of the undead race, working in a way similar to the zerg's creep in StarCraft. Players can build undead structures only on the blighted ground, with a few exceptions (the haunted gold mines and the necropolis). Whenever a building is finished, it instantly generates more blighted area around it. Furthermore, undead creatures regenerate faster while on blighted soil. The Sacrificial Skull also can generate blight.

If the buildings that created blight are destroyed and buildings from a non-undead faction are then built on blighted ground, the blight will disappear around these buildings, but trees will retain their sickly appearance and not return to health. Orc and human buildings seem to pave it over, while night elf buildings heal the land. Dispel Magic and Detonate may also remove blight.

The lower levels of Zul'Drak were under siege by three necropoli, which the Scourge was using to create blighted ground and turn these areas into sanctuaries for the undead. Their intention was to corrupt the entire zone.

The Lost Lands in Sholazar were also in the process of being blighted.