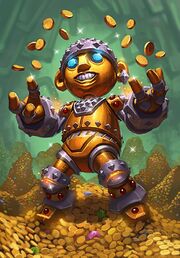 Blingtron is the name of a series of robo-unit constructs resembling gem-encrusted mechagnomes. Plated in gold and chrome with a variety of impressive inlaid jewels, these mechanical constructs are known for their endless generosity and gift-giving.

The Blingtron line didn't really pick up until the 4000 series hit the vendor shelves. Few remember the Blingtron 3000, but it was an engineering marvel in its own right.[1] When a new series of Blingtron units are released, the older series is considered obsolete and sent to their deaths in bloody gladiatorial arenas.[2] They may be created with planned obsolescence.[3]

A Blingtron's generosity circuits don't mature until they have been built to maximum specification. As such, one should not expect any free handouts from them until maturation.[4] Blingtrons are built with several sockets that carry gems.[5] While the Alliance and Horde's forces were occupied with the sabotage of the Dark Portal on alternate Draenor, one Blingtron managed to build a secret vault of riches, guarded by alarm-o-bots and crowd pummelers.[6] Touching a Blingtron's power supply may be enough to kill small critters, such as moles.[7] 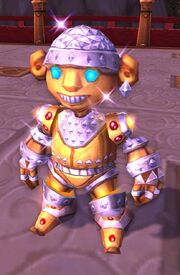 Though Blingtrons seem to be fairly common, it seems no one really knows where the design for it came from, as explained by Didi the Wrench. One rumor does pop up more than others, though: Area 52. Didi and an engineer adventurer traveled to Area 52 and asked Rocket-Chief Fuselage what he knew about the Blingtron unit's inventor. After traveling to several different locations and asking several other people what they knew, the adventurer was directed to Nixx Sprocketspring in Gadgetzan.[8]

Nixx revealed that the inventor of the Blingtron was "some no-good, dirty, little gnome who don't know nuttin about engineering" and that he had a granddaughter, Winkey, down on Southbreak Shore. Winkey revealed the name of her grandfather, Gnopetto Bizzfuse, whose one and only invention was the Blingtron unit. Everyone wanted to learn his secrets of how he created Blingtron's internal circuitry, but he refused to share it. He eventually died after the sea rose and devoured his shop off the coast of Tanaris.[8]

The adventurer borrowed Winkey's diving helm, dived into the sea, and managed to find Gnopetto's old workshop, a journal and the old, still intact circuit design for Blingtron.[8] Using the circuit design, Didi was able to finish the Blingtron module for Reaves.[9] 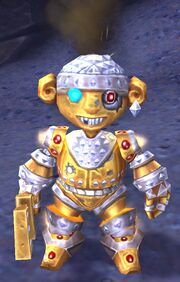 Blingtron 2000 appear far smaller and weaker than most other Blingtrons and appear to have been consigned to death in the Brawler's Guild along with the Blingtron 3000. Blingtron 2000's greatest achievement consisted of tiny bits of chocolate coated with a thick layer of gold.[10]

Blingtron 3000, described as "Last Year's Model", was rendered obsolete with the introduction of the Blingtron 4000, and was therefore consigned to the Brawler's Guild.[2] Card Trader Ami commented that the Blingtron line didn't really pick up until the 4000 series hit the vendor shelves and that few remember the Blingtron 3000, but it was a real engineering marvel in its own right.[1]

[Blingtron 4000] is described as a robot of infinite wealth who likes to be called "Bling". He appears to be very friendly, wishing adventurers a nice day, and readily offers gifts to them. According to his calibrations, the gifts should invoke feelings of enjoyment and gratitude.[11] When talked to, Blingtron 4000 asks adventurers, if they are "ready to appear visually attractive to your species", after which he changes their appearance with a short-term buff. His despawning line of Goodbye nearby living beings! My unique presence is requested in another dimension. may be considered to be pure frivolity, or possibly a serious statement of their destination upon teleporting away.

[Blingtron 5000], though broadly similar to the Blingtron 4000, is notably damaged, lacking teeth and featuring numerous broken and missing components. The 4000's cheery greeting of "What is up, my primary <male/female> sibling?" was replaced with a somewhat disturbing "There's a party in your heart, and all the bladed weapons are invited. Have a pleasant day."

Likewise, the 4000's "Party Mechanical" buff with the description "Dashing. Daring. Exciting. Blingtron is all of these things, and he can't wait to hit the next party scene. Get your quality time with him now, because he'll be out of here soon!" was replaced with a more threatening "Killing Time" with the description "This Blingtron unit has been called away from something important... and looks a little angry. You had better talk to him while you can."

This is further seen in their behavior with the adventurers they interact with. While the 4000 units are very polite and friendly, saying "I am pleased to offer this gift to you, <race> <class>. According to my calibrations, it will invoke feelings of enjoyment and gratitude. Have a nice day.", the 5000 instead directly threatens them with "You will accept this gift, and you will like it. To do otherwise will automatically engage my organic incineration weapons. Thank you."

Additionally, 5000 units will immediately attack any nearby 4000 or 5000 units, engaging in a violent fight to the death in which there can be only one winner. Destroying another Blingtron will cause the victor to gain a stack of the "Gold Star" buff, causing them to grow in size and strength.

Blingtron 6000 is the result of summoning Reaves after attaching

[Reaves Module: Bling Mode]. It uses a noticeably more neutral tone than the 4000 and 5000 units, simply stating "While I am programmed for gift distribution, my observations indicate that you are programmed for gift reception. Shall we engage in a mutually-favorable transaction?" when talked to by adventurers.[12] 6000 units do not engage with 4000 units, but will instantly kill a 5000 unit in a single hit if attacked. When "partying" with a 6000 unit, the adventurer is teleported to a random location in Azeroth or alternate Draenor.

Blingtron MK2 is fought during the Battle of Dazar'alor. 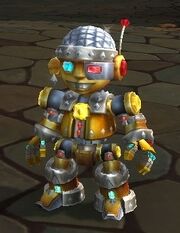 Blingtron 7000 seems to be the latest model of Blingtron, and is constructed using schematics found in Mechagon. It contains many accessories that make it appear "high tech", including an antenna on the left side of its head and a red left optic sensor. More fragile than the previous two versions, it can be easily defeated in combat by a 6000 or 5000 unit. Like the 6000 unit, it can transform a user to "party mode", but cannot teleport a user. The gifts it dispenses can include Champion Equipment, including a

The worrisome darker turn in the Blingtron series that began with the 5000 units becomes far darker with the discovery of the Decoded Messages, occasionally found in the 5000's gift packages. These messages describe an ongoing secret war, in which the Blingtrons are engaged in a vast struggle against a formidable enemy which has infected the Blingtrons with a virus, later identified as a "clockwork assembly system hack". Despite the Blingtrons' efforts, organic awareness of the War is growing quickly.[13]

[Bejeweled "Egg"] is a treasure in Tanaan Jungle, but it is not an egg but rather a damaged blingtron head without a body. It might be the one who built the secret vault in Tanaan.