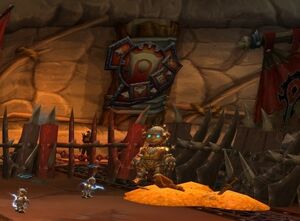 Blingtron 3000 is a Blingtron and one of the special Rank 6 Challenge Card encounters in the Brawler's Guild. To fight him, players must use

[Challenge Card: Blingtron 3000], purchased from the card trader in the arena. To unlock the ability to purchase the challenge card, players must first open up Blingtron 4000 Gift Packages until a quest-starting item opens up. 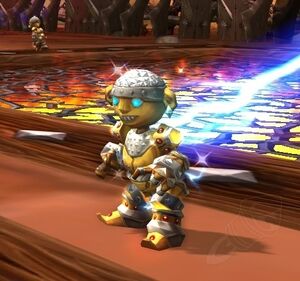 At one end of the arena, Blingtron 3000 will spawn, rooted in place with piles of gold surrounding it. In the opposite corner, a Gnomish Tesla Coil appears. Do not bother doing any damage to the 3000 just yet.

Blingtron 3000 will repeatedly summon Blingtron 2000s. The objective is to line up a chain of "dead" 2000s a few yards apart starting up at the tesla coil and ending up near the 3000's position. Once the chain of roughly seven 2000s extend from the tesla coil to the 3000, quickly run over to the coil and turn it on. This stuns the 3000 and causes it to take an additional 900% damage, which is the only conceivable way to beat the enrage timer. Save all cooldowns for this point.

Blingtron 3000's 5.8 million health translates to just above 48K DPS over the whole two minutes, but players will have significantly less time to do any meaningful damage to the 3000.