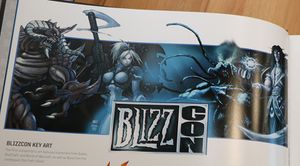 BlizzCon 2005 was a BlizzCon event hosted by Blizzard Entertainment that took place at the Anaheim Convention Center between October 28-29, 2005. There were more than 8,000 people who attended BlizzCon 2005.

All BlizzCon attendees received their share of free Blizzard swag,[2] including a beta key for the World of Warcraft: The Burning Crusade trial, an in-game baby Murloc vanity pet named "Murky", as well as a BlizzCon T-Shirt, BlizzCon playing cards, and other Blizzard-themed souvenir items.