BlizzCon 2016 (a.k.a. BlizzCon X)[2] was a BlizzCon event hosted by Blizzard Entertainment that took place at the Anaheim Convention Center on November 4-5, 2016. There were more than 27,000 people who attended.

The official date for BlizzCon 2016 was announced on April 6, 2016. This BlizzCon was during the anniversary celebration of Blizzard Entertainment's 25th Anniversary and Diablo's 20th Anniversary.[3] 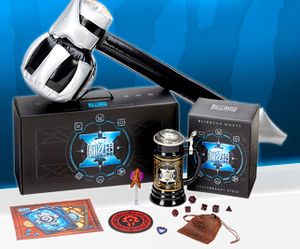 Attending the event or purchasing a virtual ticket has given players access to:[2]

‡ The portrait was related to D.Va from Overwatch that also came with a bonus goodie: the D.Va Announcer.[6] The announcer was made available later for purchase on the Blizzard Shop while the portrait stayed exclusive to those who attended or bought the virtual ticket.