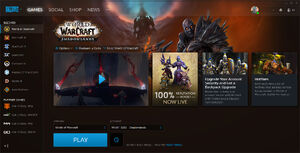 The Blizzard Battle.net desktop app is a launcher application for Battle.net 2.0 games, including World of Warcraft, which replaced the Blizzard Launcher. An initial version was released in August 2013. The application unifies the login procedure for all supported games, essentially removing the need to re-enter account, password, and authenticator information when logging into a game, and is capable of displaying recent news, patch notes, and promotions relevant to each title. The app also has a chat functionality, which was enabled on 3 April 2014.[1][2] There are plans to add support for the original Blizzard games.[3] On 23 March 2017, version 1.8.0 was released that included Blizzard's plan to transition from the Battle.net brand to a new name of this application which is Blizzard Desktop app. On 14 August 2017, Blizzard reversed the removal of the "Battle.net" moniker.[4]

The Blizzard Battle.net desktop app has the feature for Voice Chat, Channel (or group) Chat and even Streaming Games to Facebook.[5] The open beta for the application started on October 5, 2017 and release of 1.9.1 on October 19, 2017, introduced new features such as Player Profiles and Avatars,[6] to appear offline,[7] the Social Tab and Groups,[8] gifting,[9] and the shop update.[10] 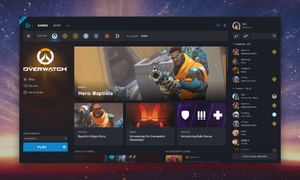 On November 1, 2019, a new beta was pushed that completely refreshes the look for the desktop app, including going back to the "Battle.net" brand.[11]

The following games are available from the app: