From Wowpedia
(Redirected from Blizzard North)
Jump to: navigation, search 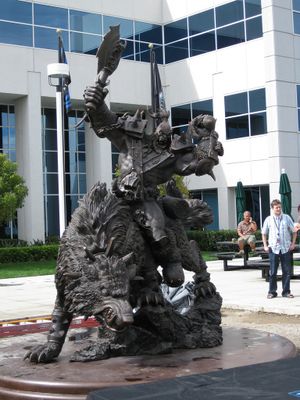 A statue of an orc riding a wolf, located outside Blizzard's office.

Blizzard Entertainment® (often shortened to "Blizzard" or "Blizz") is a video game developer & publisher that is responsible for the Warcraft, StarCraft, Diablo, and Overwatch franchises. The company originally concentrated primarily on the creation of game ports for other studios before beginning development of their own program with the development of games like Rock n' Roll Racing & The Lost Vikings.

In July 2008, Blizzard's parent company, Vivendi, merged their Vivendi Games subsidiary with Activision to create a new holding company called Activision Blizzard.[1][2] Five years later, in July 2013, Vivendi sold off most of its shares in Activision Blizzard, which now exists as an independent company.[3] As of October 2014, the company employs over 3,900 individuals.[4]

Originally under the name Silicon & Synapse, the company was founded on February 8, 1991[6][7] by three graduates of the University of California, Los Angeles:[8] Allen Adham and Michael Morhaime. Brian Fargo, the CEO and founder of Interplay Entertainment, was granted a share in the company to improve the prospects of working jointly for the young studio.[9][10] Frank Pearce also joined the studio upon inception as the first employee.[11] 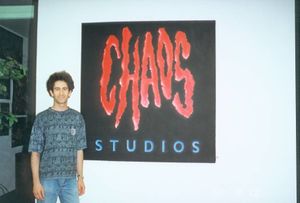 The small company initially did many "ports", converting games from one platform operating system to another, including board games (Battle Chess, Lexicross), strategy games (Castles), sports games (Amiga Baseball), and others (Dvorak Teaches Typing), though the company did become the first American developer to release a Super Nintendo title with RPM Racing, which became one of the first ten launch titles for the platform in North America.[11]

It was not until Interplay Entertainment and Silicon & Synapse collaborated on the SNES side-scroller The Lost Vikings that it's critical — though not commercial — breakthrough came. With some acclaim, the game hit the shelves in 1993. The game's release, along with Rock & Roll Racking (also 1993) led Nintendo to name the studio its "Developer of the Year". Tragically, the release of the two games coincided with the death of the 16-bit console market, and neither title sold well.[11]

Facing a lack of success in the console market, and not willing to bet solely on one market, the company continued developing several 16-bit console titles while branching out by starting development on two new games: Games People Play, a crossword/word-game that was never completed, and Warcraft: Orcs & Humans, whose development was led by its second employee and VP of Research & Development, Patrick Wyatt.[11]

The company temporarily re-branded itself as Chaos Studios and released the game Blackthorne under that studio name, but conflicts with an unregistered trademark for the name "Chaos" caused the company leadership to consider a new name. Upon acquisition by Davidson & Associates, then the #3 North American educational software publisher, in February 1994, the company changed its name to Blizzard Entertainment.[11]

On October 3, 2018, Activision Blizzard announced J. Allen Brack as the new president of Blizzard Entertainment succeeding Mike Morhaime.[16] In February 2019, Blizzard underwent a round of layoffs, though announced that it would be expanding its development staff. Teams for some of its IPs, including Warcraft and Hearthstone, will be expanded.[17]

On March 7, 2019, Blizzard and GOG.com partnered to release the classic Diablo on GOG.com's platform[18] as well as Warcraft: Orcs & Humans and Warcraft II: Battle.net Edition by March 28.[19] On June 5, 2019, Blizzard gave the OK to GOG.com to add the authorized non-canoncial expansion Hellfire which was developed by Synergistic Software to Diablo as a free add-on, due to popular demand.[20]

Blizzard North was originally founded in 1993 as Condor Inc. by David Brevik, Erich Schaefer, and Max Schaefer. Blizzard North came out in January of 1995 with an idea pitched with Allen for Diablo.[21] The company was purchased and renamed later in March of 1996[7] and was the Bay Area division of Blizzard Entertainment, known for its Diablo series. The studio was originally based in Redwood City, California, before being moved a short distance away to San Mateo, California, with Blizzard proper being based in Irvine, southern California. On August 1, 2005, Blizzard Entertainment announced the closure of Blizzard North with a key reason for the closure was Blizzard's North poor development of what was to be Diablo III, which didn't meet Vivendi's expectations. There was also a couple mentions of Blizzard South, which was known for the StarCraft and the Warcraft series. However, the name wasn't mentioned as much but it was used to keep confusion from Blizzard North as Blizzard South is based in Irvine, California, Blizzard's main location.

In 2013, Blizzard announced an official partnership with TeSPA to provide licensed StarCraft, Hearthstone and Heroes of the Storm in-game rewards to college gaming clubs.[22][23][24] In early 2014, TeSPA and Blizzard Entertainment hosted the $5,000 North American Collegiate Hearthstone Open series, culminating in a live grand finals event at the Twitch.tv stage at PAX East and PAX Prime.[25]

After the release of World of Warcraft, the company divided its development staff into numerically designated teams (e.g. Team 2 is the dev team for World of Warcraft), each team focusing on a specific project. While relatively small, each team is supported by a much larger cast of employees, as well as being overseen by other groups within the company.

In addition to the numerically designated teams, "strike teams" were formed, as a result of Chris Metzen's desire to keep the company's original culture intact. These teams are not assigned to any one project, but give feedback on separate projects. A "design council" also exists, a gathering of all of the game directors and lead designers throughout the company.[4] As of August 2017, most of Blizzard's development focus is on supporting its existing IPs, but is working on new IPs as well.[26] As of November 2018, Blizzard's current development model is to effectively have one team per IP and support indefinitely. As a team grows and reaches a certain size, elements of the team will be spun off to work on a new IP. Each team consists of around 100–300 people.[27]

Blizzard Entertainment, Inc. remains Blizzard's brand,[31] as it and Activision continue to exist as separate entities within the Activision Blizzard umbrella.[32]

Note: Blizzard has confirmed that they are NOT working on a StarCraft or Diablo MMORPG.[37]

About 50% of all Blizzard games have been cancelled during development.[27]

These are the following awards received for Blizzard Entertainment and Warcraft related.[59] For other game awards, see Diablo and StarCraft.

World of Warcraft: Warlords of Draenor