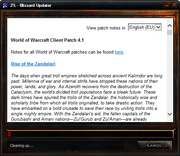 A Cataclysm-themed Blizzard Updater updating a World of Warcraft patch 4.0.6a client to 4.1.0.

For World of Warcraft, it was essentially replaced by the Blizzard Launcher with the "stream" installation update from patch 4.0.1. Although, standalone patches were still being made for download until patch 4.2.0. For Warcraft III, the Blizzard Updater was used up until patch 1.27b when it was replaced with a Blizzard Installer built around the Blizzard Battle.net desktop app which lasted up to patch 1.31.1.