The Blood-Tempered Ranseur was the Blood Knight order's distinctive weapon.[1] As such, many Blood Knights mobs were using a ranseur.

The creation of the blood-tempered ranseur required a variety of rare and volatile materials, resulting in a fearsome weapon of superior craftsmanship. To properly temper the metal of the ranseurs, they had to be quenched in the blood of a powerful demon.[2]

This item was a quest reward from

As of World of Warcraft: Legion, players who had previously acquired the ranseur are able to find it in their wardrobe for Transmogrification, even if they had lost or discarded it prior. 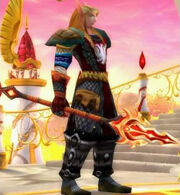