Not to be confused with Bloodcurse. 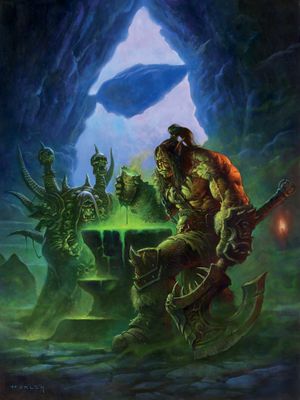 The blood-curse[1][2][3][4][5][6] (or blood curse,[7] Blood Curse,[8] bloodcurse[9] and also referred to as the Blood Pact[10]) is the curse laid upon orcs when they consume the fel blood of a pit lord. Gul'dan had persuaded the orc warchiefs of Draenor to drink the demonic blood, and it was this stain that had hounded them for so long. Even those who had not partaken found themselves developing an unquenchable thirst for slaughter, their skin turning green with the taint.[11]

The blood of Mannoroth, the vile fluid that ran through the veins of the Destructor, was used to corrupt the orcish race and bind them to the will of Kil'jaeden. Prior to the opening of the Dark Portal, Mannoroth was summoned to Draenor by Kil'jaeden, who instructed the orc warlock Gul'dan to spill the Destructor's blood into the empty meditation pool of the Temple of Karabor. Sometime later, assembled at the Throne of Kil'jaeden, the vast majority of the orcish race — the first being Grommash Hellscream and his Warsong clan — drank the burning blood and became minions of the Burning Legion. Only a select few, most notably Orgrim Doomhammer and Durotan's Frostwolf clan, refused to drink.[12]

Lethargy of the orcs

After the Horde was defeated and rounded up into internment camps, the orcs began to suffer serious withdrawals and sink into lethargy, or succumb to demon-crazed madness. Grommash, who was one of the few orcs to escape the internment camps, resisted the maddening bloodlust and paralyzing lethargy that was consuming his race for many years.[13] Antonidas learned that the orcs had been under the crippling influence of demonic power (or warlock magic) for generations. He speculated that the orcs had been corrupted by demonic powers even before their first invasion of Azeroth. Clearly, demons had spiked the orcs' blood, which in turn granted the brutes unnaturally heightened strength, endurance, and aggression. Antonidas theorized that the orcs' communal lethargy was not actually a disease, but a long-term racial withdrawal from the volatile warlocks magic that had made them fearsome, blood-lusted warriors. Though the symptoms were clear, Antonidas was unable to find a cure for the orcs' present condition. Many of his fellow mages, as well as a few notable Alliance leaders, argued that finding a cure for the orcs would be an imprudent venture. Left to ponder the orcs' mysterious condition, Antonidas' conclusion was that the orcs' only cure would have to be a spiritual one.[14] 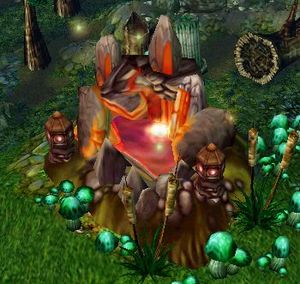 The Chaos Well from Warcraft III.

Years later, after the Exodus of the Horde, the curse would be back. Mannoroth — at the advice of the Dreadlord master of the Scourge, Tichondrius — spilled his blood into a fountain of life, knowing that the orcs would eventually find it. This would have the effect of not only returning the orcs to their blood-crazed past but also dealing with an old foe: the demigod Cenarius himself.

Cenarius, as a being so attuned to nature that he can sense the slightest corruption, assumed that the orcs in Ashenvale were scouts of the Legion so the demigod, alongside the night elves, hunted Grommash and his Warsong clan due to their lumber operations in Ashenvale. This, ironically, would send the Warsong clan back into the service of Mannoroth and to the reestablishment of their connection to the potent fel magic that first bound them to the Legion.[15]

The Warsong clan were in a losing battle but a Darkspear witch doctor sensed a power nearby. Hellscream and his Warsongs went to the source of power that resulted to be the now-corrupted fountain of life, the Chaos Well. Hellscream's witch doctors, who had sensed the power of the fountain, now warned him that the fountain was cursed, but the Warsong chieftain and his forces drank from the corrupted fountain anyway. Later, Cenarius was slain by the newly empowered Warsong orcs but moments after their victory Mannoroth appeared before them and enslaved them once more.

Thrall was able to purge the curse from Grommash Hellscream using a soul gem and an elven Ritual Circle thus Grommash managed to break free from this second blood pact. Together, the two orcs decide to face Mannoroth. It had been Grommash who had first drunk the blood of the demon Mannoroth - blood that had tainted him and all others orcs who had drunk it. But in the end, Grommash had his revenge. Using all the strength he had left, Hellscream made a devastating blow against the pit lord, shattering his plate and spear by driving his axe deep into the demon's chest. In an explosion of demonic energy Mannoroth the Destructor was no more, but the effects of this left Grommash mortally wounded. Though he had been the first to drink, and thus the first to fall to demonic bloodlust and madness, he had been the one to end the curse. As he lay on the ground, the crimson haze lifted from the eyes of Grommash Hellscream and his clanmates; the Blood-curse which had damned his race for generations was finally over and thus the orcs were free from their enslavement by the Legion forever.[16] And with that gesture, the orcs began to reclaim their own great hearts, wills, and spirits. However, their skin would remain green, due to the lingering effects of fel exposure.[15]

Illidan Stormrage used Magtheridon's blood to create the Fel Horde which was led by Kargath Bladefist.[17] This was done in order to fight the Burning Legion on the shattered world of Outland.[18] Eventually this came to an end as the Alliance, the Horde and some other major factions in Outland stopped Illidan.

On alternate Draenor, Gul'dan was the first to drink the blood of the demon Mannoroth, turning his skin green and changing his visage.[19] The warlock then proceeded to have all of Draenor's clans to drink the blood, but Garrosh Hellscream had already convinced the orcs and Grommash to not accept it.[20]

After the Iron Horde was defeated, Gul'dan took command of it[21] and many orcs drank the blood.[22] Kilrogg Deadeye and his Bleeding Hollow clan,[23] as well as Gul'dan's new allies, the Sethekk arakkoa led by Iskar and the Sargerei draenei under Velhari, all accepted the fel gift. With the arakkoa, the blood-curse showed the ability to reverse the Curse of Sethe.[24]

Orcs that drink the blood of a pit lord are shown gaining supernatural strength, speed, resilience, and stamina.[citation needed]  The effects, as well as side effects, are immediate, and the symptoms that manifest from blood consumption are green skin, glowing red eyes, and a considerable increase in size. Further exposure and physical change cause the skin to turn red, a greater increase in body mass, green/purple/yellow eyes, extra tusks, and bone growth that breaks the skin.

The demon blood that most of the orcs imbibed back on Draenor increased their natural bloodlust a hundredfold.[25] With their systems permeated with demonic blood, the orcs burned with a lust for killing that would not be sated even if they slew every last draenei on Draenor and would never be sated until death stiffened their corpses.[26]

The Blood Curse enslaving the orcs to the Legion may function based on the law of sympathy. Being a part of the demon's body, blood would have a very strong sympathy and link the imbiber to the source of the blood. Through this link, a powerful demon could influence and control the imbibers. When that demon is killed, the sympathy is broken and they become free, as we saw with the orcs after Mannoroth's death.