Not to be confused with Blood Font (Vale of Eternal Blossoms). 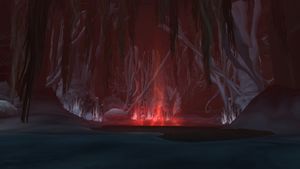 The Blood Font is an area below Atul'Aman in Vol'dun. It consists of two chambers both overgrown with pale fungi: one rectangular western room, and one triangular eastern chamber centered around a huge triangle-shaped pit that spews a constant red glow. The Blood Font can be accessed from the south via the Fetid Crypt and from the north by a narrow passageway that leads out of the pyramid.

After stealing the keystones of Atul'Aman, General Jakra'zet and his Sandfury trolls traveled to the Blood Font to begin the blood ritual to resurrect Mythrax. The general was confronted by Bladeguard Kaja, Warguard Rakera, Vorrik, and a Horde adventurer, but although the battle ended with the general being mortally wounded, Jakra'zet still achieved his goal by jumping into the pit and sacrificing himself to raise Mythrax, forcing the adventurer and their companions to flee out of the pyramid.[1]