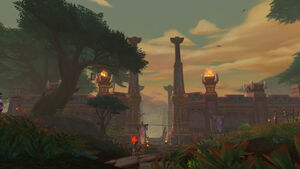 The Blood Gate (or the Blood Gates)[1][2] is a Zandalari fortification on the border between Zuldazar and Nazmir. It was broken by the Cataclysm,[3] and is now under attack by the blood trolls coming from Nazmir, and King Rastakhan himself leads the defense against them.

Later, the Alliance invaded Nazmir and attacked the Blood Gate, killing the blood trolls. The Zandalari and the Horde quickly mobilized to a counterattack led by Talanji. It was later revealed that this attack was just a distraction for the main Alliance army to invade Zuldazar which resulted in King Rastakhan's death.