From Wowpedia
(Redirected from Blood Troll)
Jump to: navigation, search

Blood trolls are a troll subspecies, they were long ago Zandalari who clung to blood magic.[1][2] They inhabit the swamp of Nazmir on Zandalar and worship the blood god G'huun. They use blood magic, which corrupts the creatures around them and turns them into blood beasts.[3]

The blood trolls of Nazmir are the monsters that haunt every Zandalari child's nightmares, and for good reason. In the Zandalari capital of Zuldazar, stories are passed down from generation to generation cautioning children to behave, lest Nazmir's twisted practitioners of blood magic come to snatch them from their beds, and those who dare brave the swamp have a habit of disappearing, never to return.[4] Therefore they can be regarded as the boogeymen of Zandalari children.

During the final era of the Council of Tribes, millennia ago, a foolish troll summoned Hakkar the Soulflayer to the island of Zandalar,[5][6] which released a plague of corrupted blood killing thousands of trolls. It was deemed that the bodies, too polluted for proper burial, would instead be burned and kept in special urns. As time progressed, this method became commonplace among the Zandalari in disposing of their dead.[7] After the great plague, there were still those who clung to the magics of the blood god. They tested their magics and perfected them. One such relic was a totem, which when concentrated upon, would drain not just the life from their enemies, but also their blood, infusing the caster with it and altering them in unusual ways. This was the dawn of who the Zandalari call "the blood trolls".[1] At some point, the blood trolls started worshiping G'huun. Because G'huun has no need for technology, the blood trolls regressed into a more primitive state compared to other troll races.[8]

The blood trolls fashioned their home within Nazmir, with Zul'Nazman serving as their capital. In the wake of the Cataclysm earthquakes and tidal upheaval rocked the Zandalari trolls, causing widespread devastation on Zandalar.[9] Following these natural disasters, the blood trolls began assaulting the Blood Gate within Zuldazar.[10] 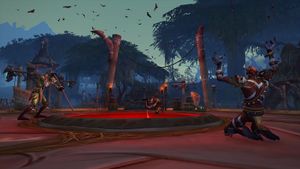 Blood trolls in a ritual.

While seeking the aid of Hir'eek, Horde adventurers would discover his grim fate and with the aid of Jo'chunga and his poison end the corrupted loa. The death of their loa enraged the blood trolls causing Grand Ma'da Ateena to declare after Zuldazar fell the Horde would be next.[13] After discovering Torga's death, the Horde would strike back against the blood trolls and later witness the reincarnation of Torga.[14] Seeking the aid of the final loa within Nazmir, the expedition discovered the blood troll assault on Krag'wa. The blood trolls drained his children of their blood and planned to sacrifice Krag'wa himself.[15][16] They slew every last one of his worshipers in Nazmir. From all of this, Krag'wa was greatly weakened and had to be made strong again.[17] After restoring his power by eating a feast and releasing the power sealed in his totems, Krag'wa unleashed his fury on the blood trolls.[18]

Blood trolls under the command of Ma'da Renkala joined with Zul in attacking Zuldazar with the goal of breaking the final seal keeping G'huun imprisoned. Though both Zul and Renkala would be slain the final would seal would be broken by Mythrax the Unraveler.[21] With G'huun now free from his imprisonment a number of blood trolls came to reside within Uldir. Following the rebirth of Zul, the blood trolls would follow his commands in the battle against enemies of their dark god. Unwilling to let G'huun free himself a group of adventurers stormed Uldir doing battle against the blood trolls, Zul, and even G'huun himself, ultimately killing the blood god.

The state of the blood trolls following the death of their god and leaders is unknown.

During the assault on Nazmir, High Warlord Cromush was confident that the Alliance could never take Nazmir and would likely get themselves killed by blood trolls.[22] This seems to suggest that even with their losses the blood trolls still have a capable army.

The blood trolls' culture is very harsh and the most primitive troll culture there is because their god G'huun has no need for technology. Their society is also matriarchal; males follow the orders from females without question lest they get chained up and punished or outright sacrificed.[24] Male blood trolls use the word "ma'da" (Zandali for "mother") as a term of respect for the females of their society.[4]

Females of the Natha'vor tribe cannibalize particularly on the males within the tribe,[25] and call their three most powerful witch doctors "corpse mongers".[26]

The Amaki tribe keep their men as slaves while bloodsingers drain male "volunteers" for blood to use to turn Krag'wa's tadpoles into crawgs.[27]

Blood trolls fuel their voodoo with profane blood rituals, harnessing undead monstrosities to do their bidding. Many who enter the swamps do not leave, instead, become a sacrifice to G'huun.[4] Their mastery of blood magic trumps that of other trolls.[28]

Blood troll poisons are made to paralyze, not kill because they want prisoners alive.[29]

Female dire trolls appear to be highly regarded within blood troll society and are often referred to as "Warmothers"; some, like Warmother Nagla and Warmother Boatema are the leaders of a tribe.[30][31]