This article is about the playable race. For the blood elf lore, see Blood elf. For the in-game faction, see Silvermoon City (faction).

The blood elves (or sin'dorei, for "Children of the Blood" in Thalassian) of Quel'Thalas are one of the playable Horde races in World of Warcraft that were introduced in The Burning Crusade. Once known as high elves, and even having been allied with the Alliance, they renamed themselves after their kingdom was nearly destroyed by the vast undead armies of the Scourge. In the aftermath, Reagent lord Lor'themar Theron found aid in the unlikeliest place - their former Ranger General, Sylvanas Windrunner. After struggling with magical addictions after the destruction of their power source, abandonment from their former allies in the Alliance, and the betrayal of their prince, the blood elves endured and found a place for themselves within the Horde.

They start in Eversong Woods in the northern region of their homeland, adjacent to the Ghostlands, a level 10-20 zone that is also a part of the kingdom. Silvermoon City is the rebuilt capital of the blood elves. Hawkstriders are their racial mount, and Thalassian is the language they speak, although they are also able to communicate with their allies by speaking orcish. 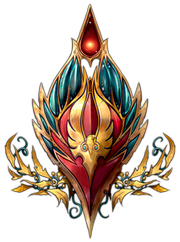 Long ago the majestic high elves created the splendid golden city of Quel'Thalas, built around a magical fount of energy known as the Sunwell. When the Lich King destroyed their capital in the Third War, the survivors turned to the Horde for help.
Now known as the blood elves, these refugees are all that remains of their glorious civilization. They strive to rebuild Quel'Thalas while struggling against a crippling addiction to the very magical energies that once built their empire.

For nearly seven thousand years, the high elves cultivated a shining magical kingdom hidden deep within the forests of northern Lordaeron. But five years ago, the undead Scourge invaded Quel'Thalas and drove the elves to the brink of extinction. Led by the evil death knight Arthas, the Scourge destroyed the mystical Sunwell, thereby severing the elves from the source of their arcane power. Though the scars of that conflict are evident, the remaining elves have banded together and retaken much of their homeland. Calling themselves "blood elves", these grim survivors are committed to regaining the vast powers they once commanded. Inspired by the leadership of their beloved prince, Kael'thas Sunstrider, the blood elves now seek new sources of arcane magic and the means of defending their land against the undying horrors of the Scourge. As one of the few surviving blood elves, you must master your thirst for magic and help shape the destiny of your people.

The past few years have seen unprecedented changes within the eternal land of Quel'Thalas. The blood elves, following the will of their crazed leader, Kael'thas Sunstrider, channeled dangerous, chaotic magicks to transform their sacred Sunwell into a gateway of unspeakable evil. While Kael'thas and his demonic masters were eventually defeated, a different transformation occurred within the Sunwell itself as a dying naaru sacrificed its life essence to reignite the Sunwell as a font of holy energy. Now, the blood elf regent, Lor'themar Theron, sees a new hope on the horizon for his people. Over time, the Sunwell's Light could cure the blood elves of their cursed state, but many still cling to the arcane powers they procured and are hesitant to relinquish them. As one of the remaining blood elves, you must fight to protect Quel'Thalas and help redeem the soul of your ancient people.

Long ago the exiled high elves landed on the shores of Lordaeron. They struck out to find a new home, and after many battles with the trolls, established the kingdom of Quel'Thalas. Using a vial of sacred water stolen from the first Well of Eternity, the high elves created a fount of mystical power at a convergence of ley energies in Quel'Thalas. They named this fountain the Sunwell. Its potent arcane magic fed and strengthened the high elves, and soon the wondrous city of Silvermoon was established.

Protected by a magical barrier, the high elves enjoyed peace for roughly four thousand years, but that peace was not meant to last. The Amani trolls gathered an immense army and assaulted the elven kingdom. Vastly outnumbered, the high elves hastily struck an alliance with the human nation of Arathor. The elves taught a small number of humans how to wield magic. In exchange the humans aided the elves in destroying the trolls' power base forever. Over the following years the high elves returned to their reclusive ways, but during the Third War, the diabolical Prince Arthas Menethil brought battle once again to their doorstep. Arthas required the power of the Sunwell to revive the necromancer Kel'Thuzad and raise him as a lich. He invaded Quel'Thalas and wiped out most of its population. In the end, even King Anasterian Sunstrider lay dead.

Additionally it became clear that the high elves had become addicted to the Sunwell's arcane energies. Now that the source of their magic was gone, the few remaining high elves quickly grew ill and apathetic. Prince Kael'thas, last of the royal line, returned from his studies in Dalaran to find Quel'Thalas in ruins. Thirsting for vengeance, he gathered the survivors, renamed them blood elves, and took a group of the strongest fighters to join Lordaeron's campaign against the Scourge.

Due to human prejudice, Kael'thas was forced to accept the assistance of Lady Vashj and her reptilian naga. When the humans discovered that the blood elves had been working with the naga, Kael'thas and the others were imprisoned and condemned to death. Lady Vashj soon arrived to set them free, leading them through a portal and into the broken wastes of Outland. There, the elves met the one being capable of putting an end to their hunger: the renegade night elf/demon, Illidan Stormrage. Certain that the blood elves would die without Illidan's assistance, Kael'thas agreed to serve the Betrayer.

A lone representative, Rommath, was sent back to Azeroth with a message of hope for the blood elves remaining in Quel'Thalas: that one day Kael'thas would return to lead his people to paradise. Rommath had made great progress in teaching the blood elves advanced techniques to manipulate arcane energies. With renewed purpose, the blood elves have rebuilt the city of Silvermoon, though it is powered by volatile magics. Emboldened by the promise of Kael'thas' return, the weary citizens of Quel'Thalas now focus on regaining their strength, even as they forge a new path into an uncertain future.[1]

Kael'thas would eventually return to Quel'Thalas, having forsaken his people for the Burning Legion. Taking the Naaru M'uru with him to the Isle of Quel'Danas, he sought to bring the demon Kil'jaeden into Azeroth. He was foiled by the forces of the Shattered Sun Offensive and the Sunwell was restored by the prophet Velen, using the spark of the dying M'uru to rekindle it as a source of Light.

Reinvigorated, the blood elves fight to protect Quel'Thalas, conquer their magical addiction with the Sunwell's sustainment, and help redeem the soul of their ancient people.[2]

The hawkstrider is the blood elves' primary racial mount. It was formerly called a cockatrice but was later changed, though that mythical beast remains the inspiration for the hawkstrider. As their name implies, hawkstriders resemble other members of the tallstrider family, though their plumage is both larger and more vibrant. They come in a variety of bright colors and have a thin, curved beak and burning orange eyes. Epic versions include decorative armor on the chest and head. The hawkstrider's movements exhibit the same rhythmic, back-and-forth motion which characterizes the other two-legged mounts. They use a heavily modified tallstrider model, but they possess a wildly different looking exterior and a unique standing-jump and running animation.

The blood elves also keep a large number of native dragonhawks, used by their flight masters to ferry passengers through the land. Players can also acquire a variety of dragonhawks.

The Blood Knights receive a pair of unique mounts, the Thalassian Warhorse and the Thalassian Charger. These horses use a dark color scheme inclining to red and black (the colors of the Blood Knight order) in contrast to human and dwarf paladins, who receive a blue armored version. Blood elf paladins receive both of these mounts as they gain experience.

Place in the world 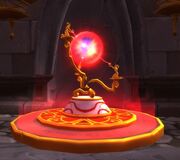 The Orb of Translocation.

Blood elf players begin in the northernmost section of the Eastern Kingdoms, Quel'Thalas.

Starting blood elf characters can use a Orb of Translocation to get to the entrance of Undercity. The orb works both ways, so characters can easily travel between the two capitals without having to go through the Plaguelands, which are much higher level zones than the undead and blood elf starting areas. Blood elf players also begin with a "Friendly" status with Undercity while being Neutral with other factions of the Horde. This is due to the nature of their starting circumstances: as far as lore goes, Quel'Thalas was an independent nation until its acceptance into the Horde in the culmination of the blood elf starting quests. Sylvanas, former Ranger-general of Silvermoon, had already taken steps to establish friendly relations between her past and present people before questing begins.

Blood elves are 5–6 feet tall, slim and wiry. Their hair and skin color reflect their affinity to fire and the sun. All blood elves have prominent eyebrows and long ears. Males have minimal facial hair. Females tend to wear elaborate ear jewelry.[3]

Males of the race are tall and slender, standing above the average human, and characterized by a lean, athletic musculature, making them seem somewhat thin when compared to larger races such as orcs. Females stand somewhat shorter, just above a human male in height, and have slender, delicate builds. They have a wide range of hair colors spanning from charcoal black to nearly white and a spectrum of skin colors ranging from pale to tan to ruddy. Blood elves have very long and thin ears, however their ears differ greatly from a night elf's. The ears of a blood elf point vertically, whereas a night elf's ears point behind them. Blood elves also have eyebrows that extend well off of their faces like whiskers, similar to that of a night elf. Both males and females are what would typically be considered exceptionally beautiful, with chiseled, refined features; males can also sport some facial hair, in the form of goatees. Their eyes glow green due to the influence of the fel energies they turned to with the destruction of the Sunwell, obscuring their natural eye color.

Blood elf players speak the ancient language of their people, Thalassian. They also speak the standard orcish, though this is restricted by gameplay; lore-wise, blood elves would be fluent in most racial languages, including most of the Alliance's.

Blood elf player characters have the following voice-acted responses to their emotes:

Although ruled by Lor'themar Theron, the blood elves have several other leaders who preside over their various organizations.

Arcane Torrent comes as a natural manipulation of Arcane energies from the Sunwell and allows the elves to tap into and unleash the magic that is their birth right. The elves have long delved into the magical and arcane as evident by their cultural centerpiece, the Sunwell. Thus, they have developed a natural Arcane Affinity as a result of the well's magical presence, making the blood elves naturally skilled with arcane arts such as Enchanting. The elves' constant exposure to magic also gave them a natural defense against many kinds of magical manipulation, granting them a natural Arcane Resistance. Mana Tap was previously used to drain magic from the environment but was no longer necessary when the Sunwell was restored. 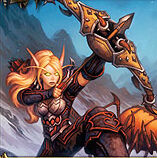