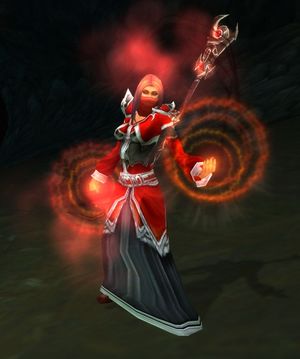 Kal'dran being empowered by blood magic.

“The limits of blood magic are still undefined.”

Blood magic is a form of tortured life magic that uses blood as a power source.[2][3] Someone who practices blood magic is often called a blood mage (or bloodmage), or blood wizard.[4]

Despite their name, the blood elven blood mages are not actually users of blood magic, they use the fire and heat of what some fear to be demonic magic.[5]

As a magic school

As the name suggests, bloodmages use blood to perform their rituals. All blood is different, and the correct combinations are required to perform certain tasks.[6] Contrary to popular belief, ancient and powerful bloodmages do not actually drink blood, but eat normal food like everybody else.[7]

On Azeroth, it is shunned by many as a dark and forgotten art. In that and many other ways, it shares some distinct characteristics with demonic magic.[8] Blood magic can be used to teleport via bloodstone teleporters,[9] scry for information,[10][11] and resurrect the dead.[1] In addition to true resurrection, it can also be used to create undead as seen with the followers of G'huun in Nazmir.

[Bloodlust] or a Bloodlust-like spell.

On Draenor, the Bleeding Hollow clan was fond of using blood in their spells, including a ritual to create dire orcs[12] and another to summon the powerful Blood Moon. They cut their own flesh, and Shadow Hunter Denjai described their magic as being like voodoo but hurting even more.[13]

To survive the harsh desert lands of Tanaris the Sandfury trolls learned the secrets of blood magic - drinking blood allowed them to access the darkest voodoo powers.[11] Several troll tribes including the Sandfury, Vilebranch and Gurubashi could deploy a class of warriors called the "Blood Drinkers", which wore heavy armor, used two-handed weapons and could leech blood from their enemies. Drakuru also had his own Blood Drinkers, which he used in Zul'Drak in the name of the Scourge. Hakkar the Soulflayer, the Loa of Blood, grows stronger with blood he consumes.[14] Blood trolls worship the blood god G'huun and use blood magic. This magic corrupts the creatures around them and turns them into blood beasts.[15] Lorewalker Cho claims the Zandalari use blood magic,[16] though the Zandalari themselves forbid it.[17] This may be because of the proximity of the blood trolls to Zuldazar, or perhaps because of the Zandalari's historical fight against Hakkar. It is referred to as the old ways, and the Zandalari have only given in to the allure since Zuldazar's wall to the north fell.[18]

The modern death knights can also specialize in manipulating blood, giving them the ability to carve into their enemies, sustaining themselves with deadly sanguine strikes, while using the bloody, shattered remains of the dead to fortify their own defenses.[19]

The mogu were able flesh-shapers. They used a vital substance called Anima to empower their Blood golems.

In Alterac Valley, Lokholar the Ice Lord was summoned through a blood ritual.[20]

Astalor Bloodsworn used blood magic to empower Blood Golems in Talador during the war in Draenor.