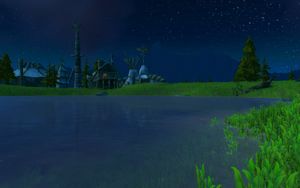 Named after the Bloodhoof tribe,[2] Bloodhoof Village is notable in that it was the first permanent settlement to be built by the tauren on flat, open ground rather than atop a mesa.[citation needed]  This is significant because it represents the security the tauren feel in their new homeland. This is the first settlement in which young tauren adventurers arrive after departing from Camp Narache to the south. Here, young tauren receive the next tier of their training. It also serves as a military hub from which willing soldiers do battle with the nearby enemies of the tauren. Located in central Mulgore, it is the hub of questing and commerce until adventurers depart for Thunder Bluff to the north. Bloodhoof Village is also the principal location in which the wild kodo beasts are tamed and sold as mounts for the tauren.

While Cairne Bloodhoof himself holds a certain fondness for the budding village,[citation needed]  the pressing duties of leading a nation keep him in the capital city of Thunder Bluff. In his stead, his son, Baine Bloodhoof, leads the tauren of the village and oversees its protection from threats. While Baine focuses on more day-to-day matters, the spiritual needs of the Bloodhoof tribe and young tauren passing through are catered to by Zarlman Two-Moons.

Shortly before the Cataclysm, right after Cairne Bloodhoof died in Orgrimmar, Grimtotem assassins tried to kill Baine Bloodhoof but failed.[3]

During the Blood War, the village was invaded by ghosts. The attack was repelled by a tauren champion.[4]

Bloodhoof Village is located in the Golden Plains of Mulgore. Lake Stonebull partially encircles the village. Here Baine Bloodhoof, son of Cairne Bloodhoof, leads an investigation into Venture Company operations to the east and a campaign against the Palemane gnolls to the west.[5][6]