For his post-Mists of Pandaria appearance, see Thalnos the Soulrender. 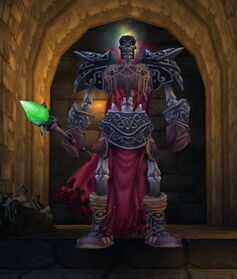 Bloodmage Thalnos was a level 31 elite skeleton mini-boss once found in the Graveyard of the Scarlet Monastery, just below the staircase at the far end of the graveyard itself.

Aggro
We hunger for vengeance. 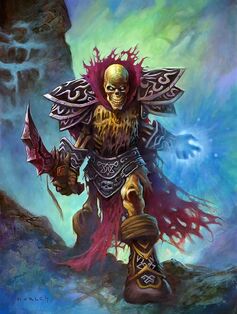 Although this is Turov the Risen from the TCG, the artwork is used to represent Thalnos in Hearthstone.

Thalnos appears as a legendary card in Hearthstone. His flavor text reads: "He's in charge of the Annual Scarlet Monastery Blood Drive!". The artwork actually depicts Turov the Risen, a skeletal mage from the TCG.

Although he lacked any distinguishing mortal features, judging from his title Thalnos was probably a blood elf blood mage prior to his undeath, as the Crusade also had Fellari Swiftarrow and Arellas Fireleaf in its ranks at some time.