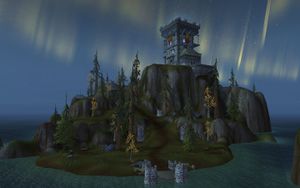 is an island off the coast of the Grizzly Hills in eastern Northrend. Standing above the trees at the top of the island is Shadowfang Tower, the new sanctum of Archmage Arugal — who was raised from the dead to serve the Lich King. The island is inhabited by Arugal's worgen and human members of the Wolfcult.

The name may be a reference to the Morrowind expansion pack Bloodmoon, which introduced werewolves to the game.