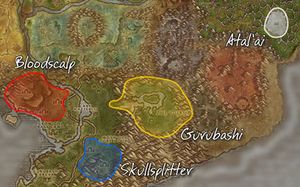 The location of the scattered Gurubashi tribes, not listed are the Darkspear who left for Kalimdor.

The Bloodscalp are a tribe (or a clan)[2] of jungle trolls that split off from the Gurubashi Empire after the defeat of Hakkar the Soulflayer. The various tribes claimed territories in the vast jungles of Stranglethorn Vale but quickly began fighting one another.

The Bloodscalp tribe has since settled in the northwest of Stranglethorn and to this day the Bloodscalp fight off all interlopers, including the nearby Skullsplitter tribe, in order to hold onto the land they have taken. Bloodscalps have nothing but contempt for the Darkspear tribe, which is the first tribe of jungle trolls to have joined the Horde.[3]

When Hakkar returned in Zul'Gurub, they tried to treat with the city by sending an ambassador.[4]

Bloodscalp Speakers can be found in Zuldazar on Zandalar.

The violent and brutal jungle trolls of Stranglethorn Vale thrive on conflict. While the Bloodscalp tribe can afford only a unit or two of these warriors, the trolls can strike swiftly and inflict terrible losses on enemy units while keeping highly mobile. The trolls will throw spears before coming into close combat with their brutal axes. If pressed, they tend to go into a berserk rage to hack and crush their way through their enemies. Motivating a mass of berserker trolls is difficult, and these creatures don't make the most responsive of troops.[6]