The Bloodtotem tribe, is one of the four Highmountain tauren tribes, led by Torok Bloodtotem. During the course of the Highmountain questline, the Bloodtotem reveal that most of them have allied with the Burning Legion, at which point they consume the blood of demons, become felsworn and known as the Feltotem, while others remained Bloodtotem. Even after Torok's death at the hands of a class leader and Navarrogg, the corrupted Feltotem continue their operations in Feltotem on the west coast of Highmountain.

Following the end of the third invasion of the Burning Legion, survivors of the Bloodtotem tribe who didn't choose to join the Legion settled at Thunder Totem. 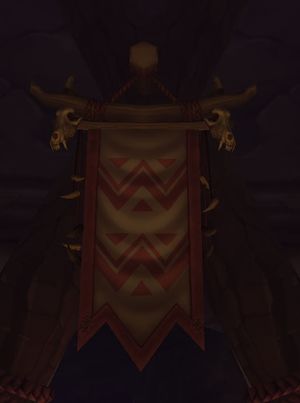 Banner of the Bloodtotem tribe.

The first chieftain of all the Highmountain tribes was a Bloodtotem, and therefore the tribe have long felt that they would make the best leaders due to their strength. This has caused a long-standing rivalry between them and the Skyhorn tribe, as well as causing the Bloodtotem to become more reclusive and unwelcoming to outsiders.[1]

During the Burning Legion's third invasion of Azeroth, the Bloodtotem tribe was enraged that the

[Hammer of Khaz'goroth], a Pillar of Creation and symbol of the united tribes, was prophecized to be given to an outsider if Highmountain were to survive. This anger was further exacerbated when the Underking of the drogbar, Dargrul, stole the hammer in his own ploy to prevent these events, declaring war on the tauren. This would lead most of the Bloodtotem to secretely accept the Legion's gifts in exchange for their allegiance.

After Riverbend's destruction at the hands of the drogbar, the player is sent to parley with the Bloodtotem alongside a Rivermane emissary named Oakin Ironbull, with the objective of unifying the Highmountain tribes. Upon arriving in Cliff's Edge, the player is informed that the Bloodtotem have gone on the offensive on a nearby drogbar tribe, capturing some of their number, even though the tribe appears to be more peaceful than their brethren in the south.[2] The captured chieftain of the drogbar, Navarrogg, tells the player that he has a feeling that the Bloodtotem intend to soon do great harm to Highmountain. He directs them towards the northern part of Cliff's Edge, where three tauren are laying dead around a table, upon which rests a cup of felblood. A Warmonger suddenly rushes forward and knocks the player back, saying that it is none of the adventurer's business.[3]

After clearing the nearby Witchwood of harpies and slaying their matriarch, the player and Oakin are allowed an audience with the Bloodtotem chieftain, Torok, who then sends them into the depths of the Cave of the Blood Trial to complete the rite of passage. Upon arriving, however, a demonic portal opens and Marakhan emerges, killing Oakin and attacking the player, at which point the Bloodtotem in the cave transform into the Feltotem. After slaying Marakhan, the captive Navarrogg says that the player and the drogbar will need to work together to defeat the Feltotem, after which he transports himself and the player to a hidden refuge to recover.[4]

The Feltotems started breeding demonic hounds to serve as guardians[5] and using them to attack class order troops.[6] They also kidnapped allies of the Unseen Path.[7] There's seems to be an alliance between the Feltotems and the Crawliac harpies as Dawn the Hag was seen leading the armies of Feltotems.[8][9] They also poisoned the waterways of Highmountain with their dreadful rituals, sickening the wildlife.[10] The Feltotem incursion allowed Legion's wyrmtongues to scavenge Highmountain tauren graves.[11]

After killing many of the Feltotem, Navarrogg and the class leader assault Torok's Bluff and eventually succeed in killing Torok himself. Navarrogg then returns to his home, the Stonedark Grotto, before heading south to Thunder Totem to declare the Stonedark's allegiance to the Highmountain Tribe in the Bloodtotem's stead.[12]

The Feltotem continue to serve the Legion on the Broken Shore. The spirit walkers of the tribe turned to necromancy,[13] and are raising fallen Horde soldiers on the Screaming Cliffs outside the Tomb of Sargeras.[14]

Following the end of the third invasion of the Burning Legion, survivors of the Bloodtotem tribe who didn't choose to join the Legion settled at Thunder Totem. 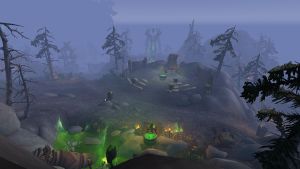 They are far more aggressive, xenophobic and cruel than the other tribes, with most members consisting of warriors or hunters. They rarely allow outsiders in their lands, apparently killing anyone not from Highmountain who enters their territory.[15] Even asking them to give an outsider an audience is a danger.[16]

The Bloodtotem totem animal is a fierce creature with a wide grin, bulging eyes and an upturned snout. Their totem can be found outside the exit of the Path of Earth in Thunder Totem, implying that they represent the element of earth.

The Bloodtotem are likely to kill both outsiders they view as weak and ones that they view as stronger than themselves, and so the challenge comes in finding a way to make them think that you are useful. The Rivermane tribe provide the Bloodtotem with food as the latter's hunting grounds can no longer sustain the tribe's needs, but the Bloodtotem still look down on the Rivermane and consider them to be pathetic.[1]

By tradition, all Bloodtotem and distinguished guests must go through a trial of blood in the Cave of the Blood Trial. The challenger first needs to show proof of their deeds, after which they are to defeat a Warmonger in single combat, then perform sacrifice at an altar deep in the cavern.[17]

Feltotem tauren resemble Highmountain tauren to a degree, but possess a dark coloration to their bodies, and a number of fel-green bony growths, most notably across their hands, similar to those seen in fel orcs. Their antlers are more outgrown and exaggerated than the mortal tauren of the region, and both their antlers and hooves burn with fel fire. They possess glowing green eyes and a fel flame on the ends of their tails. 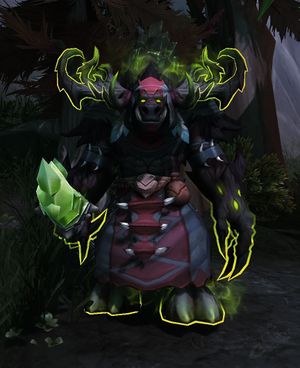