From Wowpedia
(Redirected from Blue Child)
Jump to: navigation, search 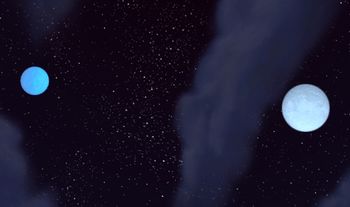 The White Lady and Blue Child over Uldum.‎

Moons exist in the Great Dark Beyond, orbiting around planets. 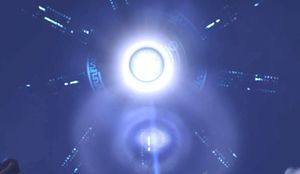 The planet of Azeroth has two moons.[1][2][3][4] Various cultures may have different names for them, but usually they play on a mother-and-child theme, as the white moon is much larger than the blue one. Once every four hundred and thirty years,[5] the two moons come into perfect alignment in an event called the Embrace.

The larger, bright and silver moon is known as the White Lady or the Mother.[5] The night elves know and worship it as Elune while the tauren refer to it as Mu'sha[6] (the left eye of the Earthmother) in Sorrow of the Earthmother.

The smaller, blue-green moon is known as the Blue Child or the Child.[5] With the addition of weather effects to the game in patch 1.10.0, the Blue Child vanished from the game, likely due to graphical errors.[7] Though it was missing from the game, it still existed in the lore as seen in Twilight of the Aspects[8] and the

[Dragonwrath, Tarecgosa's Rest] quest chain. It returned to the skies in-game with the release of patch 5.0.4, prior to World of Warcraft: Mists of Pandaria.[7]

Draenor as seen in Warlords of Draenor's alternate timeline has two moons.[9] Outland, the main timeline's shattered version of Draenor has the same two moons,[10] with the other celestial bodies visible in the sky likely being far away worlds.[11]

At some point, a Lunar Rock fell into Shadowmoon Valley. 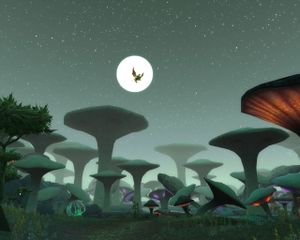 The Pale Lady as seen near the border of Zangarmarsh. 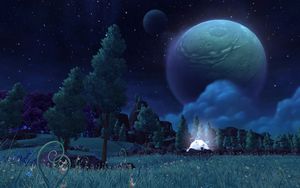 Draenor's two moons as seen from Shadowmoon Valley, in the alternate timeline.

The Pale Lady is one of the moons orbiting around the shattered orcish homeworld of Outland,[12][13] and the unshattered Draenor in the alternate timeline.

The orcs used to refer to the Pale Lady in a respectful way, as to a feminine entity of some importance, thus recalling their shamanistic heritage (significant since the storyteller is supposed to be the Warchief Thrall).

Draenor also has a second, smaller moon. It appears closer to the planet than the Pale Lady, but is far darker.

There is a reference to a certain "bloodmoon" in the first Warcraft manual, when Garona tells about the creation of the Dark Portal:

"As the Warlocks began their incantations to access the power of the rift, a howl began - low at first, then rising in pitch like a darkwolf baying during the bloodmoon")[14]

It likely refers to the red color a fullmoon can take, but it is unclear whether the moon she refers to is the Pale Lady of Draenor, or the White Lady of Azeroth, or another one of the celestial bodies that appeared over Outland after it entered the Twisting Nether - perhaps just the "rosy sphere" mentioned in Beyond the Dark Portal.[13]

Other spheres now exist as well, including a rosy one, and a smaller, light blue one.[13] These may, however, be other planets, seen through "windows".[15]

The destroyed planet that was named Fanlin'Deskor by Velen had four unnamed moons.[16]

Nathreza, homeworld of the dreadlords, had dozens of miniature moons.[17]