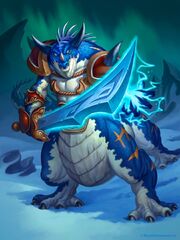 A Cobalt Scalebane in Hearthstone.

Blue dragonspawn form the ranks of the ground army within the blue dragonflight.[1]

They fought during the Third War and in World of Warcraft can be found protecting territories of their flight.

A blue dragonspawn in Warcraft III.

Blue dragonspawn and a dragon in Lands of Mystery.

Blue dragonspawn are the descendants of mortals who associated with blue dragons so closely that their families gradually transformed into part-humanoid, part-dragon crossbreeds. They take many roles in the blue dragonflight, serving as foot soldiers, emissaries to the humanoid races, and companions. While the dragons respect them, they are essentially a slave race, and they are trained from birth to give their lives to protect dragons (most dragonspawn are intelligent and loyal enough to sacrifice themselves without any such training, however). Most dragonspawn are raised and tutored by a dragon, in addition to their dragonspawn parents, and they often wear the symbol of this mentor for the rest of their lives. While dragonspawn exist for all the major dragonflights, an unusually large number of blue dragonspawn progress beyond the level of simply serving as grunt soldiers of the blue dragonflight. The unusual intelligence and disposition toward magic associated with the blue dragonflight is true of the dragonspawn as well, and this makes them more likely to follow in the footsteps of their mentors and become arcanists. Magical aptitude is rare among dragonspawn, however; it is simply less so among the blues.

Blue dragonspawn have the same interests and lifestyles as their blue dragon mentors, but they tend to work in groups, often times with a military function. These dragonspawn are almost never found far from at least one dragon of their flight.[2]

Blue dragonspawn resemble blue dragons from the waist down, but their upper bodies are those of scaled humanoids. Their arms and torsos resemble those of a human, with only slight claws in most cases, but their heads more closely resemble their draconic allies. Blue dragonspawn scales are similar in color to those of blue dragons, and they typically wear armor with colors to match their dragonflight as well.[3] This creature have the lower body of a reptile, with four massive, scale-covered legs. His torso and arms are humanoid, while his head is that of a dragon — and he has a noticeable draconic tail as well. His scales are azure, but it is difficult to distinguish them from the blue armor he wears over them. His armor is etched with draconic symbols, and similar tattoos line the scales on his exposed lower arms.[4] Standing tall on four well-muscled legs, the creature flexes massive arms clearly capable of swinging its sword with deadly force. Its scaled armor is an enameled sapphire blue, brighter than the color of the natural scales that cover the majority of its humanoid upper body. The creature’s head resembles that of a small azure dragon.[5]

Blue dragonspawn communities are male dominated, not because of any difference in power or physical strength, but rather due to the amount of time females spend dealing with the young. While blue dragonspawn value their children as much as any race, they are so focused on military objectives and the achievement of greater power and knowledge that they often neglect their young more than most races; this is especially true of the males. Unlike blue dragons, dragonspawn have a set ranking system. Blue dragonspawn ranks include (in ascending order) azurewing, cold talon, shiver scale, ice blade, magefury, winterfury, arctic magus, and ice tempest. The highest ranks are available only to those individuals who exhibit arcane mastery.

Many dragonspawn are warriors, rogues, hunters, scouts or other combat-oriented classes. The gladiator prestige class is popular among melee-oriented dragonspawn. A few dragonspawn priests worship the blue dragonflight or Malygos, contrary to most blue dragon beliefs.[6]