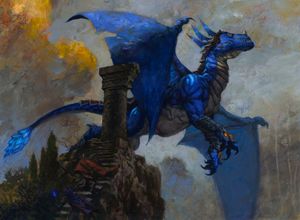 Blue drakes are the youth of the blue dragonflight.

Blue drakes are average members of blue dragon society, and are as highly varied as the young adults of any race. Drakes often take the forms of mortals to learn about them and assist mortals in their own struggles. Many drakes also begin training the youngest of the dragonspawn, taking a small group of these loyal creatures under their wing — both literally and figuratively. The massive drake emerges from the frigid waters, her ice-colored scales shimmering with hidden light. Patterns of cobalt runes line her neck and upper body, and her wings fold almost invisibly against her lithe form.

Blue drakes prefer a swift kill in combat, and they prefer to remain airborne. They use their breath weapons whenever possible, and supplement their breath weapons with spells designed to slow down or kill their prey. They are excellent tacticians and focus on enemy spellcasters and other threats first. They do not land unless there is an immediate need or all opposition is destroyed.[1]