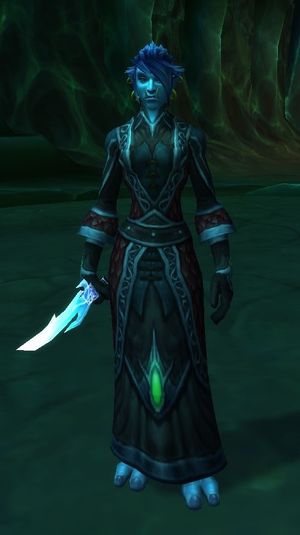 Bo'ja in World of Warcraft.

Bo'ja, "Arcanist Absolute", is a jungle troll mage who has been captured by the Burning Legion and is being held on the upper level of a Legion ship on Niskara. She is rescued by Vindicator Boros, Jace Darkweaver and a holy priest in search of T'uure, after which she assists in the battle against Captain Naranoth and then Lady Calindris. After the priest kills Calindris and claims the beacon, Bo'ja opens up a portal back to Dalaran for herself and the priest.

Stage 6
Bo'ja says: Many t'anks again, mon, for gettin' me outta dere!
Vindicator Boros says: We seek the leader of this den of horrors, an eredar called Lady Calindris.
Bo'ja says: Aye, she be outside directin' her demons ta load up more captives. I be havin' a score to settle wid her, so if ya be aimin' ta take her out, count me in!

Final Stage
You two can yell at each other later! It be time ta get outta dis place!

She needs to be rescued for the fourth stage of